A Closer Look at Ergogenic Aids 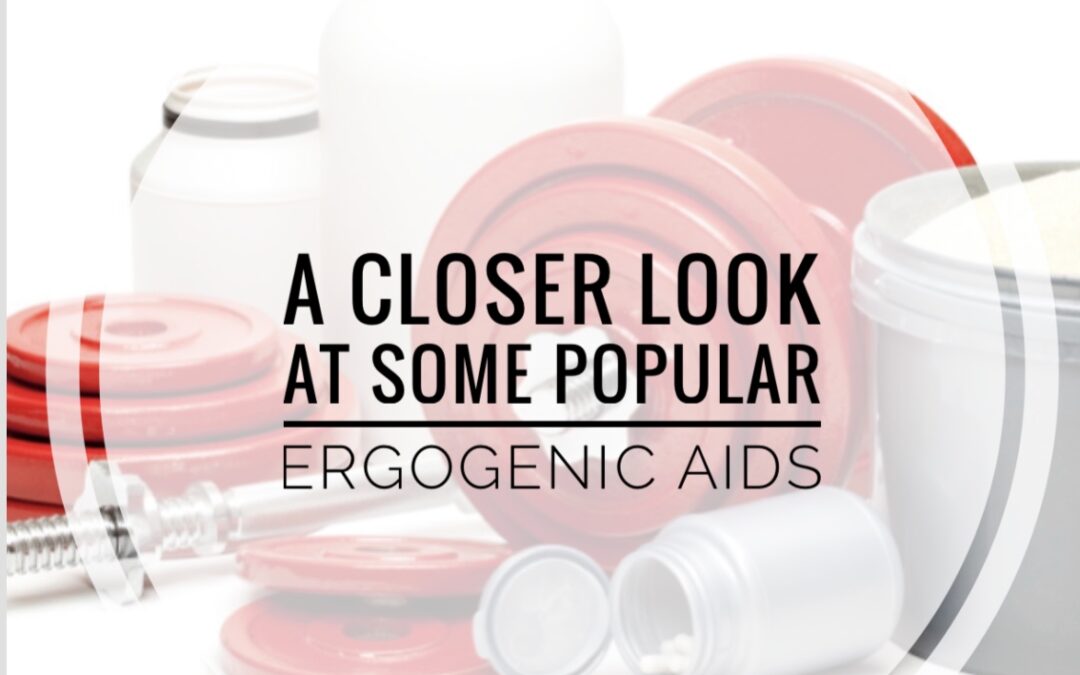 Caffeine, beta-alanine, branched-chain amino acids and creatine are a few popular ergogenic aids taken to support sports performance. Here’s a closer look into each, and what the science says. 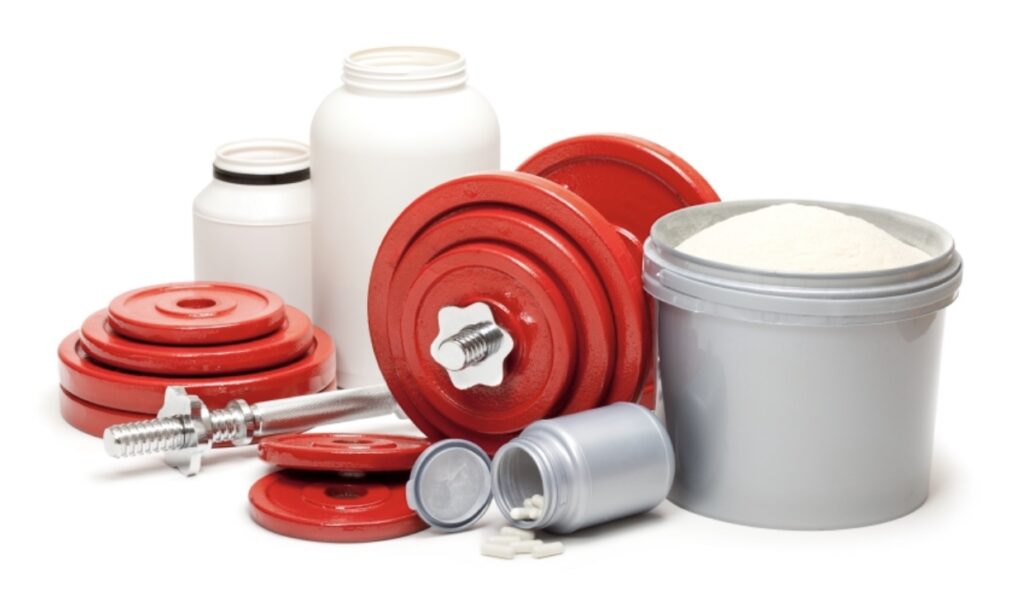 Athletes are always searching for ways to improve their performance. It’s totally understandable, too. After all, the different between winning and losing may be seconds. If a supplement or ergogenic aid can provide that advantage, it’s definitely worth investigating.

What Is An Ergogenic Aid?

An ergogenic aid, in the context of sports, is any technique or substance used for the purpose of enhancing performance. By that definition, there are many different ergogenic aids used in sports. For example, carbohydrate loading would be an ergogenic aid. So would adding protein powder to support your recovery.

Many ergogenic aids also fall under the umbrella of dietary supplements. When the supplement is taken specifically to gain a sports performance benefit, it is also an ergogenic aid.

What Are Popular Ergogenic Aids?

The list of ergogenic aids is endless. Some are commonly used by athletes, while others are not. In my work as a sports dietitian, I get the most questions about caffeine, beta-alanine, creatine and branched chain amino acids. I could write an entire post on each one. For this post, however, I’m focusing on just those few. I’m sharing what they are, how they might play a role in sports performance, and what the science says. You can find more details on each, in my book, Fueling Young Athletes.

Creatine As An Ergogenic Aid

I’ll start with creatine. It’s made by the body, but is also found naturally in some foods. Most of the body’s creatine is stored in the muscle, where it gets turned into phosphocreatine. That phosphocreatine is only enough to fuel a few seconds of action.

Taking creatine does not create bigger muscles. Instead, it allows the muscles to train harder. It provides the extra energy needed to push through that one extra rep. Over time, that extra effort can result in improved strength or more muscle mass.

Creatine is one of the most widely used and heavily researched ergogenic aids. And, the studies are pretty positive. Research shows it may help build total body mass and lean mass. Creatine supplementation, with exercise, may help improve performance for short-duration, high-intensity exercise, too. It’s also been shown to support strength gains and aid with recovery. Most importantly, it appears to be safe. That said, creatine is not effective in all individuals.

Beta- Alanine As An Ergogenic Aid

Beta-alanine is another popular ergogenic aid. It is a non-essential amino acid found naturally in the body, and is essential in the formation carnosine.

Here’s how it works – during high-intensity exercise, when there isn’t enough oxygen available, the body produces lactic acid. Over time, that lactic acid can build-up faster than the body can use it. The result is a burning feeling in the muscles, as well as cramping and nausea. Muscle carnosine acts as a buffering agent to reduce the build-up of lactic acid. In theory, that would allow athletes to maintain high-intensity exercise for a longer period of time.

The research, however, is mixed. Supplementation does increase muscle carnosine levels, but it doesn’t appear to improve performance.  Activities lasting only 1-4 minutes have shown some promising results. No benefit has been observed for activities lasting less than one minute.

The branched chain amino acids are leucine, isoleucine and valine. Unlike other amino acids, they can be burned for energy during activity. That makes them a potential fuel source. Athletes also take BCAA’s to reduce exercise induced muscle damage, improve recovery time, support immune function and assist in maintaining blood sugar levels.

All three of the branched chain amino acids support muscle protein synthesis and skeletal muscle. BCAA supplementation has not been shown to delay fatigue. They may help support immune function, but more evidence in needed to say for sure. Of the three, leucine is the most widely studied. There’s good evidence to support it’s role in muscle recovery and repair.

Caffeine As An Ergogenic Aid

Caffeine is a mild stimulant with thermogenic properties. It works by stimulating the central nervous system. It is marketed to athletes as a way to improve endurance, delay fatigue and promote fat loss.

Most studies using caffeine as an ergogenic aid has focused on endurance athletes. The research results are promising. Studies show that it can increase mental sharpness and decrease perceived effort during exercise. Meaning, it may help exercise feel easier.  That’s important for athletes trying to improve their performance. Caffeine does slightly increase metabolic rate after ingestion. However, there is no evidence of a significant effect on fat loss or weight loss.

Collegiate athletes should be cautious taking high levels of caffeine, though. The National Collegiate Athletic Association includes caffeine on their list of banned substance.

Ergogenic aids and dietary supplements can get very expensive. Before taking them, it’s important to consider their safety and effectiveness. Below ae some things to know, and things to consider.

Do Your Dietary Supplement Homework

False claims around dietary supplements and ergogenic aids are everywhere. That’s because, supplement manufacturers are not required to prove the safety or effectiveness of products before they are sold.  You should do your own homework before taking anything. Call the manufacturer if you have questions, and look to reliable sources to gain information.

Not all ergogenic aids do what they say they will. Many strech the science and lack sufficient evidence to support their claims. That goes for the common ones, too.  Before putting anything into your body, or spending your money, be sure that it is safe, effective and worth it.

Some supplements may interact with other supplements, drugs, or nutrients you are taking. It’s important to evaluate everything you are taking, to make sure it’s safe. Before taking any supplement or ergogenic aid, check with your primary care provider or a registered dietitian.

Professional and collegiate athletes need to take extra precautions before taking any dietary supplement or ergogenic aid.  Taking the wrong supplement could cost you your sports career. The list of banned substances is not exactly the same for professional athletes as it is for collegiate athletes. To maintain compliance,  NCAA athletes should stay familiar with the NCAA list of banned substances.

The nutrients you get through food work synergistically in the body. When taken as a supplement, they may not provide the same benefit.  That’s why it’s important to get your nutrients from food, when possible.

Remember that ergogenic aids don’t and won’t replace poor lifestyle choices.  You have to train hard, and eat right to perform well. Focus on putting together a solid training, nutrition, and recovery regimen. Those are the most important steps to improve your performance.  Once those are in place, you can try supplementing with an ergogenic aid for additional benefits.

Have you tried any of these ergogenic aids? Did you see a benefit?