Ginger: More than Just a Spice 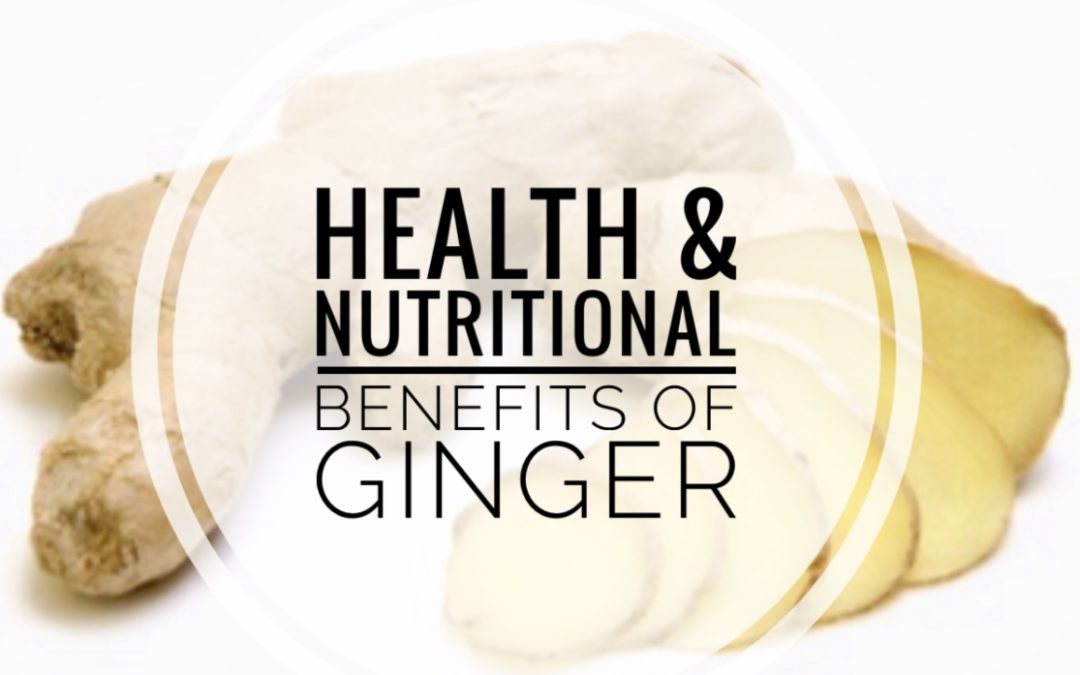 Incorporating ginger into recipes adds a lot more than just flavor – the root contains active components thought to offer some nutrition and health benefits, too. Learn why this potent spice deserved a spot on your spice rack. 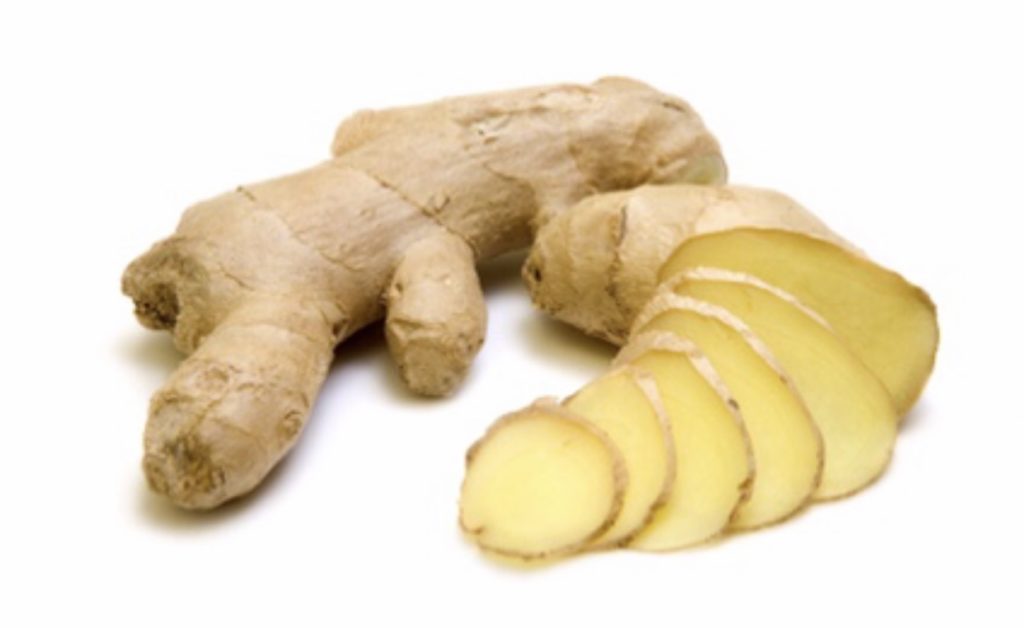 Have you ever heard that sipping on ginger ale will help calm your stomach?  My grandmother would tell me that years ago. I didn’t like any carbonated beverages growing up, so I never tried it. I also didn’t really believe it. To date, I haven’t found any science suggesting that ginger ale can sooth an upset stomach. Ginger, on the other hand, is a different story.

What’s the first thing that comes to mind when you think of ginger? I immediately picture myself grinding a piece of the raw spice to use in a recipe. It’s a flavoring agent that I use in my cooking.

Botanically, ginger is a plant that has leafy stems and yellowish green flowers. The ginger spice that we consume comes from the underground root of the ginger plant.  It has the appearance of a knotted, light brown stem. Inside that stem is the aromatic herb.

It’s flavor is often described as pungent and spicy.  Aside from medicinal uses, it is widely used in cooking. Its distinct taste and aroma give a unique flavor profile to many ethnic dishes.  It can be purchased in various forms, including fresh, dried, ground, crystallized, preserved, pickled, or as ginger oil.

Why Do People Use Or Take Ginger?

Ginger is native to China, Japan and India, but now grows in other parts of the world. According to the Natural Medicines Database, the use of ginger for medicinal purposes dates back to over 2,000 years ago. It played a prominent role in Chinese, Indian and Japanese medicine.

Today, people use it for many reasons. Like I mentioned above, it’s used to flavor foods and beverages. It’s also touted for a very long list of ailments. Upset stomach (including morning sickness and nausea/vomiting from cancer treatment and surgery), motion sickness, colic, gas, diarrhea, loss of appetite, pain relief (arthritis, muscle soreness, menstrual pain), upper respiratory tract infections and cough are just a few.

People also use ginger juice topically to treat thermal burns. And, a  topical preparation made with the extract, has been touted and used to prevent insect bites. 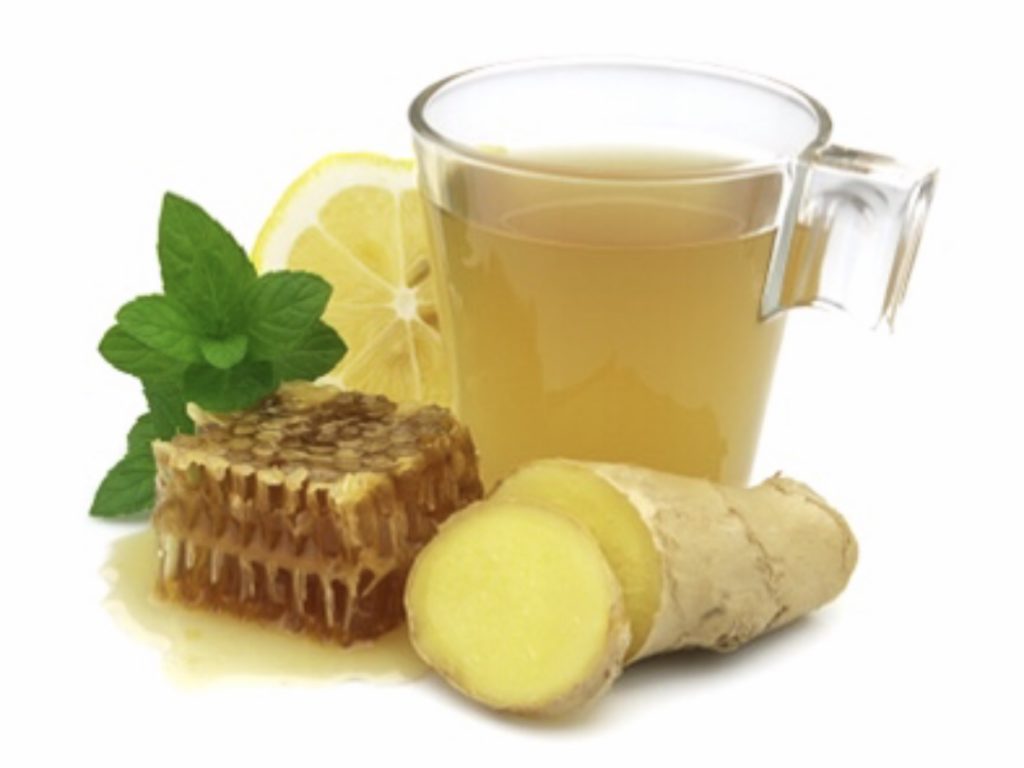 What The Science Says

Ginger root contains active components that are thought to provide anti-inflammatory properties.  However, anytime I see a long list of medicinal uses, I immediately wonder if there’s any evidence to support the claims and uses. I dug into the research to see for myself. Below is what I found.

What Does The Research Say?

There’s a ton of research investigating ginger’s potential medicinal purposes. The problem is, the studies are looking at different things. Even the research studing the same ailment lack consistency. the subjects, the dosing and the type of ginger used, are all over the board. That makes it difficult to come to a conclusion.

There is some evidence to support it’s use, though. According to the Natural Medicines database evidence summary for ginger,  there are four uses in which it is possibly effective. They are:

Here’s the science to support each one.

Can Ginger Help With Pregnancy-Related Nausea And Vomiting?

Some studies have shown that ginger may be an effective treatment for pregnancy-related nausea and vomiting.  However, it’s important to remember that dietary supplements are not regulated by the FDA. Anyone considering using the dietary supplement should first discuss it with their doctor. That’s holds especially true during pregnancy.

Can It Help Ease The Symptoms Of Menstrual Pain?

When it comes to dysmenorrhea, better known as the pain associated with menstrual cramps, it might be worth trying. Clinical research has shown that taking between 500- 2,000 mg of ginger powder daily, during the first 3-4 days of a menstrual cycle, resulted in a 1.4- 3.9 point decrease in pain, on a 10-point scale. Results from meta-analysis data show an overall decrease of approximately 2.3-2.6 points.

Other studies have shown that it may be as effective as anti-inflammatory agents. A study published in The Journal of Alternative and Complementary Medicine indicated that ginger taken during menstruation may reduce menstrual pain.  In this study, 250 mg of a specific ginger extract was given four times per day during the first three days of the menstrual period.  This regimen reportedly reduced pain as effectively as medications (mefenamic acid or ibuprofen) in 62% of women.

While the results are modest, it’s something for those that struggle with symptoms to consider.

Can It Reduce The Incidence Of Antiretroviral- Induced Nausea And Vomiting?

If you’re not familiar, antiretroviral induced nausea and vomiting can be a symptom of taking antiretroviral drugs – the drugs used to treat HIV infection. In this group, ginger may be able to help. The research is limited, but one study showed positive results. The HIV positive subjects took 0.5 grams of ginger, twice a day, 30 minutes before taking their antiretroviral medication. They did that for 14 days. The results showed that ginger reduced the relative likelihood of nausea and vomiting by about 63% and 79%, respectively, compared to the placebo group. While more research is needed to say for sure, it appears to be effective in that group.

How Can Ginger Help Symptoms Of Osteoarthritis?

Out of all of the potential medicinal uses that I reviewed, the majority of clinical research was looking at its potential to help the symptoms of osteoarthritis.

While the results are modest, clinical research showed that taking ginger extract daily can improve pain in some patients with osteoarthritis The analysis evaluated five clinical studies, of which three were included in the results.  The evaluation showed that taking 500-1000 mg of ginger extract daily, for 3 -12 weeks, may reduce pain and disability by a small to medium amount. Those results are when compared to a placebo, in patients with knee or hip osteoarthrosis.

Some clinical research has compared ginger to conventional drug treatment. In one clinical trial, 500 mg of ginger extract, twice daily, was compared to taking 400 mg of ibuprofen, three times a day, over a one month period.  The subjects had osteoarthritis of the hip or knee. There was no significant difference between ginger and ibuprofen, and both significantly reduced pain compared to placebo. This outcome suggests similar efficacies.

However, research comparing the two is contradictory. In a different study, subjects took 170 mg a specific ginger extract orally, 3 times a day, for 3 weeks. The results showed that the group taking the extract was significantly less effective than the group taking 400 mg of ibuprofen 3x a day, at reducing pain. The authors concluded that, considering ginger takes several weeks to see a benefit, the trial might not have lasted long enough.

There are many other studies investigating ginger’s potential to help individuals with osteoarthritis. Topical applications that include ginger extract, ginger oils and aromatic essential oil containing ginger have all been used in research. While the results seem promising, one study showed the effects are short lived.

Does Ginger Help With Muscle Pain And Soreness?

In my world of sports medicine and nutrition, I see the most interest in its potential anti-inflammatory properties. Since some evidence suggests that it can help with the pain associated with osteoarthritis, it makes sense to study if it could help with muscular pain, too. The results, though,  are mixed and inconsistent.

In a double-blind, placebo-controlled, randomized study, ginger resulted in moderate-to-large decreases in muscle pain experienced from exercise-induced muscle injury.  Most clinical research, however, shows no benefit in helping prevent or treat exercise induced muscle soreness during or after exercise. One study, done on cyclists, shows that taking 2 grams, 30 minutes before cycling did not reduce exercise related pain during exercise. Another clinical study, consisting of 27 participants, had subjects take 2 grams of ginger 24-48 after eccentric exercise. The results showed no significant reduction in muscle pain within the 45 minutes after ingestion, suggesting it was not effective at treating exercise induced muscle soreness.

Nevertheless, athletes that are suffering from inflammation may want to give ginger a try. Adding some to a smoothie, soups or homemade energy bar recipe can add flavor, and it’s likely safe when used appropriately and orally.

What About Motion Sickness?

When I started my review of ginger research, the one area that I expected to find promising results was with motion sickness. I was wrong. Research in support of it is weak. While two studies did show promise, most clinical evidence suggests that it doesn’t work.

While none of these studies prove that ginger is always effective, they do shed light on its potential benefits.  Overall, when compared to other medications, there appears to be few negative side effects resulting from the use of ginger. The one exception to that is taking ginger supplements during pregnancy. You should always talk to your doctor before taking any supplement, or trying any natural remedy. Asking a pharmacist is wise, too. Some natural remedies interact with prescription medications.

That said, if you don’t have any contraindications, and your doctor agrees, it might be worth a try. Even if it doesn’t help you feel better, it adds a lot of flavor to your food.

*Note:  This research review and findings should not be taken as advise to use ginger to treat any symptoms or medical condition. If you are considering taking ginger in the form of an herbal supplement, be sure to check with your health-care provider first.