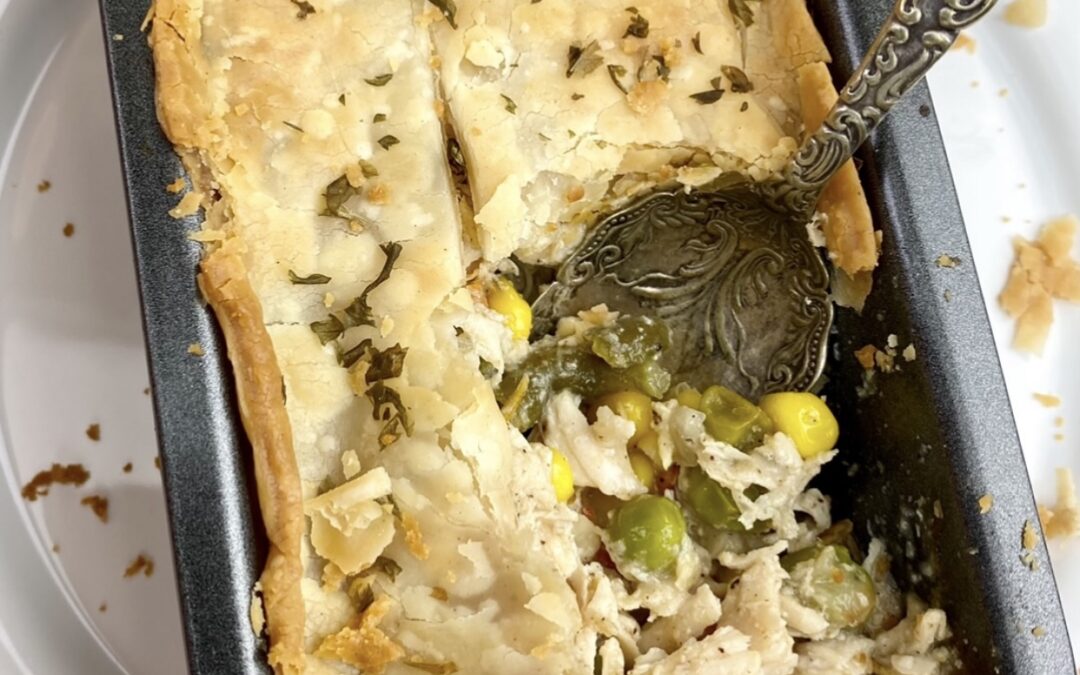 This healthier chicken pot pie recipe is modified from traditional recipes to provide fewer calories, fat and sodium while delivering more protein, fiber and flavor! It’s made in individual, single-serve portions so everyone is sure to get their fair share of veggies and protein! 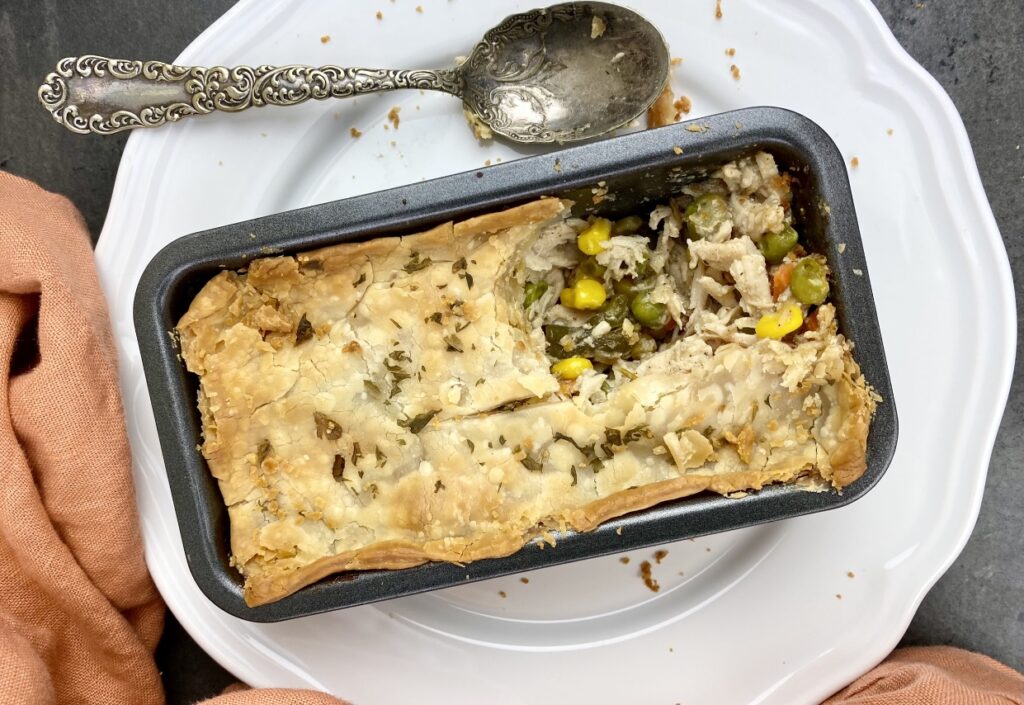 Disclosure: This post contains some affiliate links to show you the equipment that I used. If you click on the link and make a purchase, I may earn a commission. You can review my full disclosure policy here.

A few months ago, my friend Lizzie shared a photo of her vegetarian pot pie on Instagram. It looked so good I wanted to reach through my phone and take a bite! It also reminded of how long it’s been since I had pot pie. My mom used to serve us the frozen varieties when I was a kid. I admit, I was never a huge fan. Casseroles, in general, were never a favorite of mine. Something about my food being hidden in thick sauces and gravies is a turn-off to me. Who knows, maybe I had a bad experience from my childhood that I can’t remember.

Over the past few weeks, I haven’t stopped thinking about that photo of Lizzie’s vegetarian pot pies. She made them look so good.  Then, this past week, one of my clients asked me if I had a recipe for a healthier chicken pot pie. It was so weird. Like a sign that I needed to make it. 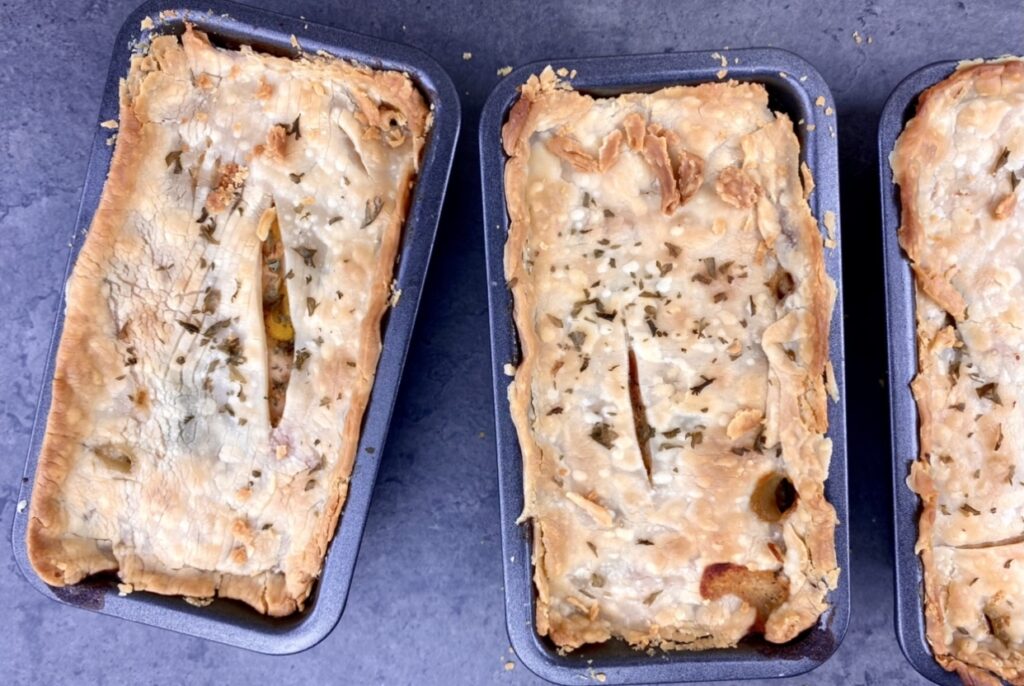 So, I did. And, I’m so glad. It was absolutely delicious, even with the healthier modifications that I made. This version is lower in calories, fat and sodium, and higher in fiber and protein than traditional recipes. And, it’s super simple to make.

How To Modify Chicken Pot Pie To Be Healthier

Only Use Crust On the Top Of The Chicken Pot Pie

A significant amount of the calories and fat in traditional chicken pot pie come from the crust. Only using crust on the top of the pies made a big difference nutritionally. For this recipe, I used a ready-to-use refrigerated pie crust rather than making my own. According to the nutrition facts label on the package, one crust was 8 servings with 100 calories per serving. Since this recipe is only four servings, and I was only using crust on the top, I only needed ½ of it for the recipe. I rolled the other half back up and put it back in the refrigerator.

Depending on when you buy it, refrigerated pie crusts can last a few months in the refrigerator. If you save ½ for another day like I did, be sur to check the expiration date so that you use it before it expires. If needed, you can double this recipe and make 8 healthier chicken pot pies instead of four.

Cut Back On Butter And Added Fats

I know, butter makes everything better! I agree, but it can also drive the calorie and fat content of a recipe up considerably. And, the amount that some recipes call for isn’t always necessary. When making this healthier chicken pot pie, I only used one tablespoon of butter, and it was plenty!  To make sure that the filling didn’t dry out, I added extra chicken broth.

Cook The Chicken Without Added Fats

Many chicken pot pie recipes will call for “cooked chicken” but don’t share how to cook it. That’s because, it really doesn’t matter. It just needs to be cooked, then shredded. However, if you want to make a healthier version of chicken pot pie, the preparation method does matter. Using boneless, skinless, all-white meat chicken breast will be fewer calories and fat than using dark meat chicken. And, the preparation method can play a role, too. For this recipe, I cut the chicken into large chucks, then boiled it in chicken broth. You could bake it in the oven the same way, but it does take longer. Boiling the chicken in this way did not add any additional fat or sodium, and it was fully cooked in under 10 minutes.

This recipe doesn’t use a lot of flour, but you can boost the nutritional content of the small amount it does have by using a whole wheat variety. Whole wheat flour has more fiber than white and also contains a higher amount of many other nutrients. This swap doesn’t add a ton of extra nutrition, but every bit matters. And, since it’s mixed with so many other ingredients, you can’t taste the difference at all! 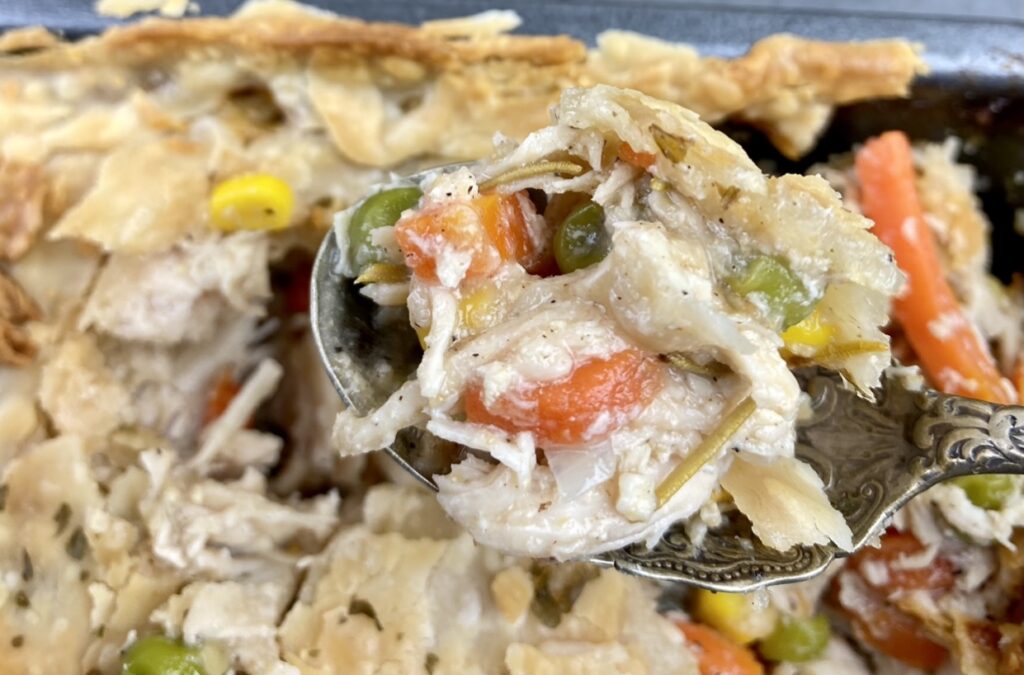 Increase The Amount Of Vegetables Used

I’m all about the veggies, and this recipe is the perfect way to sneak extras in without anyone knowing. I used 2 ½ cups of mixed vegetables for this recipe, which means that each serving has over ½ cup of vegetables. I was a bit nervous that I’d have more filling than would fit in my four serving containers, but nope. This recipe resulting in the perfect amount of filling to make four hearty servings.

The nutritional information for one serving of chicken pot pie, cut from a traditional pie pan, depends on how big of a piece is cut. That means, you may not really know what you are getting. Using single-serve, individual pans solves that problem! For this recipe, I used my favorite mini bread loaf pans. I bought the set a few years ago and I can’t even begin to express you how useful they are.  I use them to make everything from meatloaf to banana bread to Shephard’s pie. Each one is 3.65’ X 6.25” X 2.38”, which holds a bit more than a ramekin or even the larger sized muffin tins. They’re a perfect size for this recipe.

Aside from the portion control benefit, the single serve containers make super cute healthier chicken pot pies! They’re also easier to eat from, and you can be sure you’re getting your fair share of veggies. 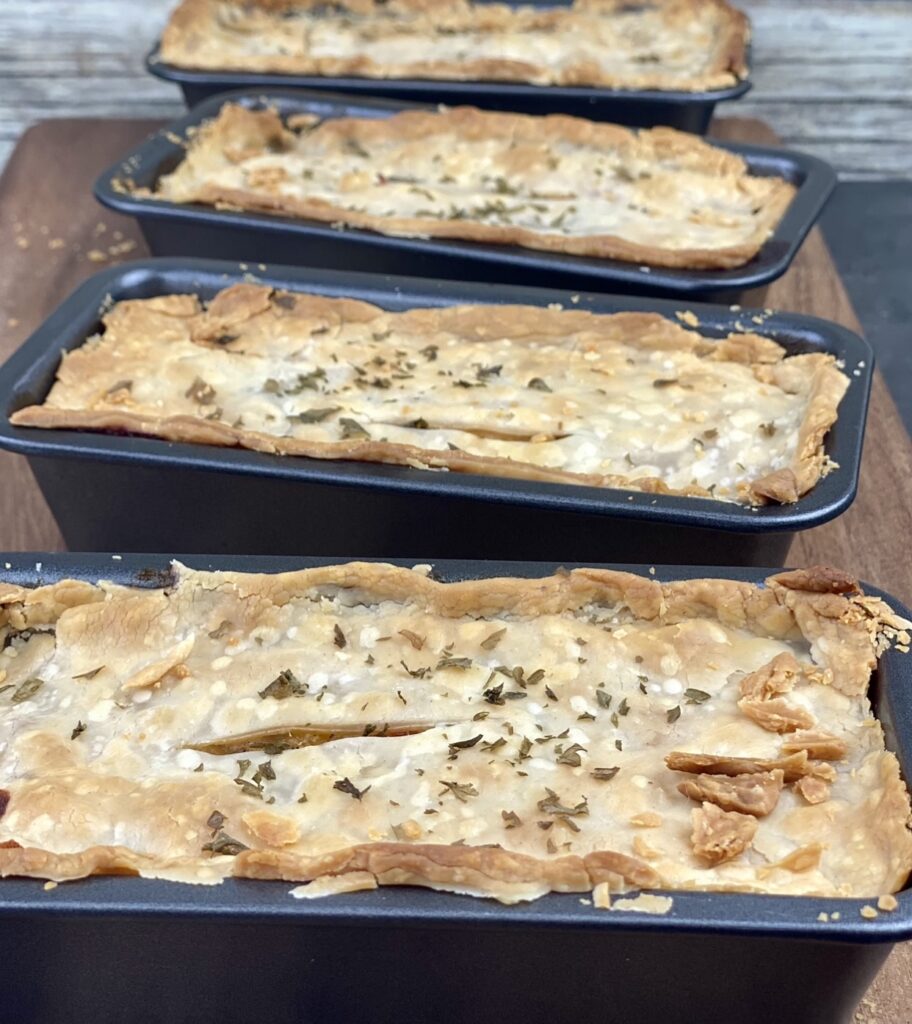 To make this healthier chicken pot pie, start by pre-heating the oven to 425 degrees. If you have an oven that heats up quickly, you can hold off on this step until the chicken is cooked. If your oven takes a while, I suggest doing this first. You can also spray the mini bread pans and place them on a baking sheet. That way, they are ready to go once your filling is cooked.

As always, I suggest getting all the needed ingredients out, and preparing them first. Use a clean cutting board to trim and cut the chicken into large chucks. On a separate cutting board, dice your onions. I used jarred minced garlic for this recipe but if you’re using fresh garlic cloves, you’ll need to chop that, too. Measure your herbs, spices and liquids to make sure you have everything that you need.

Put one cup of chicken broth into a small saucepan and bring it to a boil. Then, add the raw chicken pieces to the broth and allow it to simmer over medium heat until cooked. This preparation method saves tons of time, as the chicken should be fully cooked in under 10 minutes. You just want to make sure that you do not overcook it. Set a timer for ~8 minutes so that you remember to check the doneness. You can do that by inserting a food thermometer into the center of one of the large chucks. The chicken is fully cooked when the internal temperature of the chicken reaches 165 degress F.

While the chicken is cooking, you can begin to make the pot pie filling. Start by melting the butter in a medium saucepan, over medium heat. Once warmed, add the diced onions. Cook the onions for ~ 2 minutes or until they are soft, then stir in the minced garlic. Add the milk, chicken broth and the whole wheat flour to the sauce pan with the onions and garlic. Continue to stir the mixture until the flour is combined and the liquid starts to thicken. Once simmering, add the salt, pepper, rosemary and the frozen mixed vegetables. The mixed vegetables do not need to be defrosted. Continue to simmer, stirring regularly, until the mixture begins to simmer.

Combine The Chicken And The Vegetables 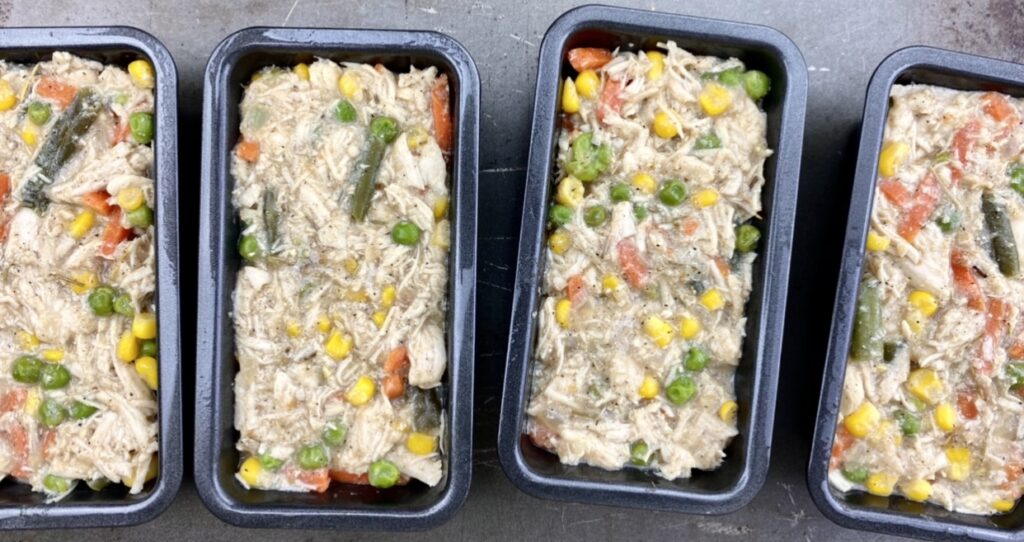 Unroll the refrigerated pie crust and cut it in half. You only need ½ of the crust for this recipe, so re-roll the unused portion and return it to the refrigerator.

Use your hands or a rolling pin to shape the crust into a long rectangle, then use a knife or pizza cutter to slice it into four, even, rectangular pieces. Place a piece of crust over each of the 4 individual pot pie pans, then use your fingers to seal the crust over the sides. Once sealed, use a sharp knife to make a slice down the center of each pie. 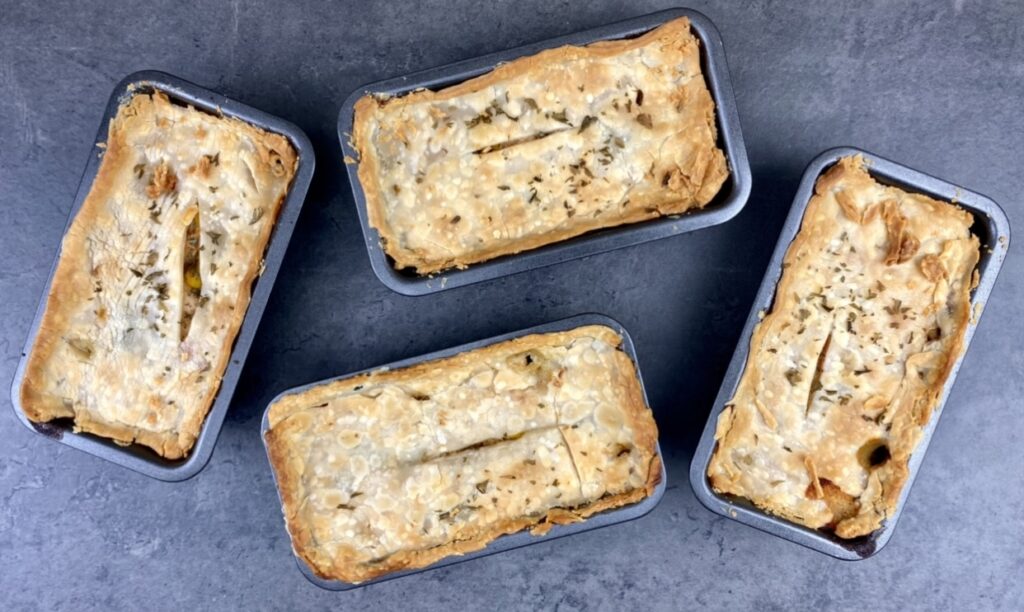 Transfer the baking sheet with the individual pot pies to the oven. Bake at 425 degrees for 20-25 minutes. Be sure to use the middle oven rack so that the crust doesn’t burn. I like my crust crisp, so I did not cover them with foil. To prevent over-browning, however, you can cover the edges of each pie with foil before putting them in the oven. Cook that way for the first 10-15 minutes, then remove the foil for the remaining 10 minutes. 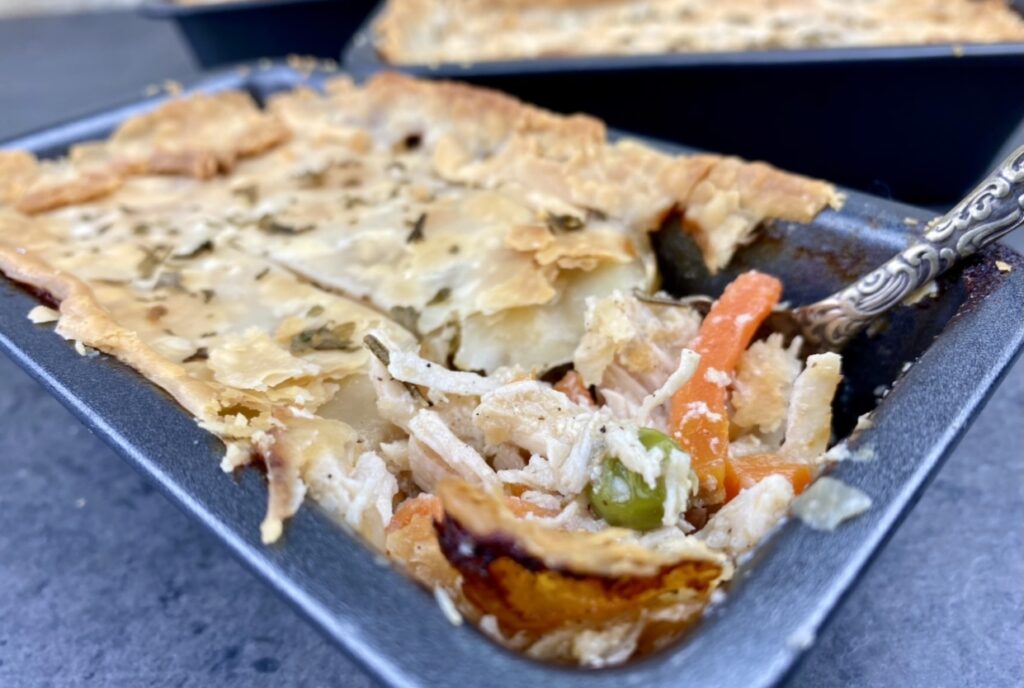 Best of all, they are delicious. Give them a try now, or pin the recipe to your Pinterest page for later! 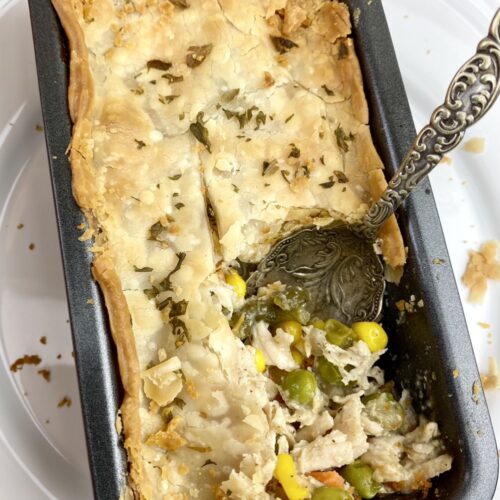 This healthier chicken pot pie recipe is modified from traditional recipes to provide fewer calories, fat and sodium while delivering more protein, fiber and flavor. It’s made in individual, single-serve portions so everyone is sure to get their fair share of veggies and protein!
Author: Heather Mangieri, RDN