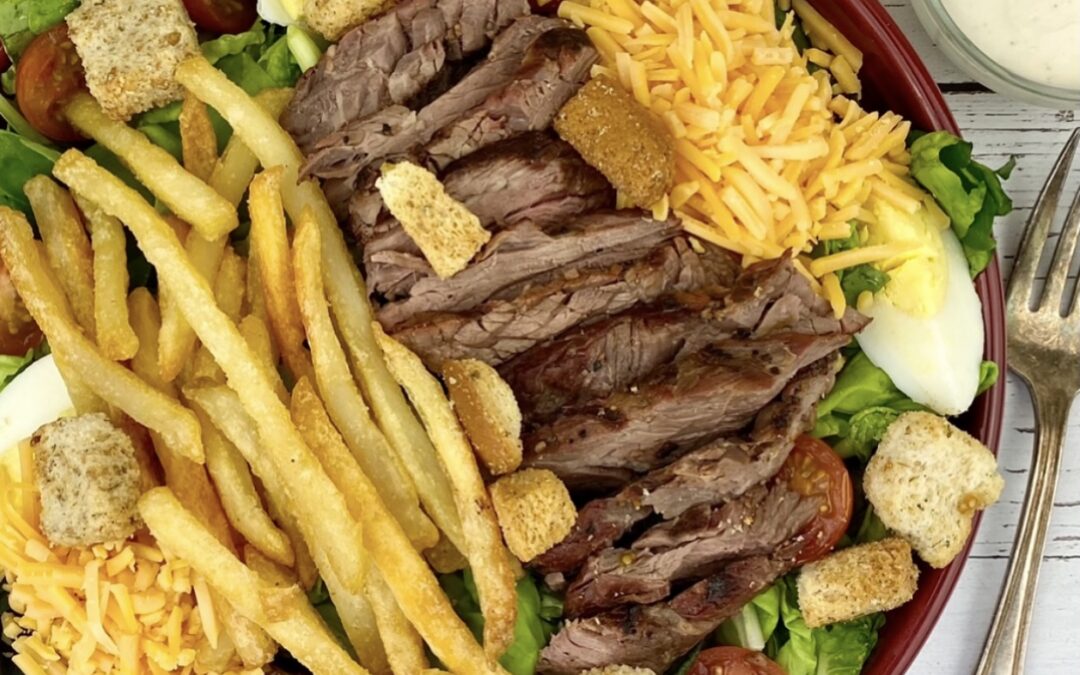 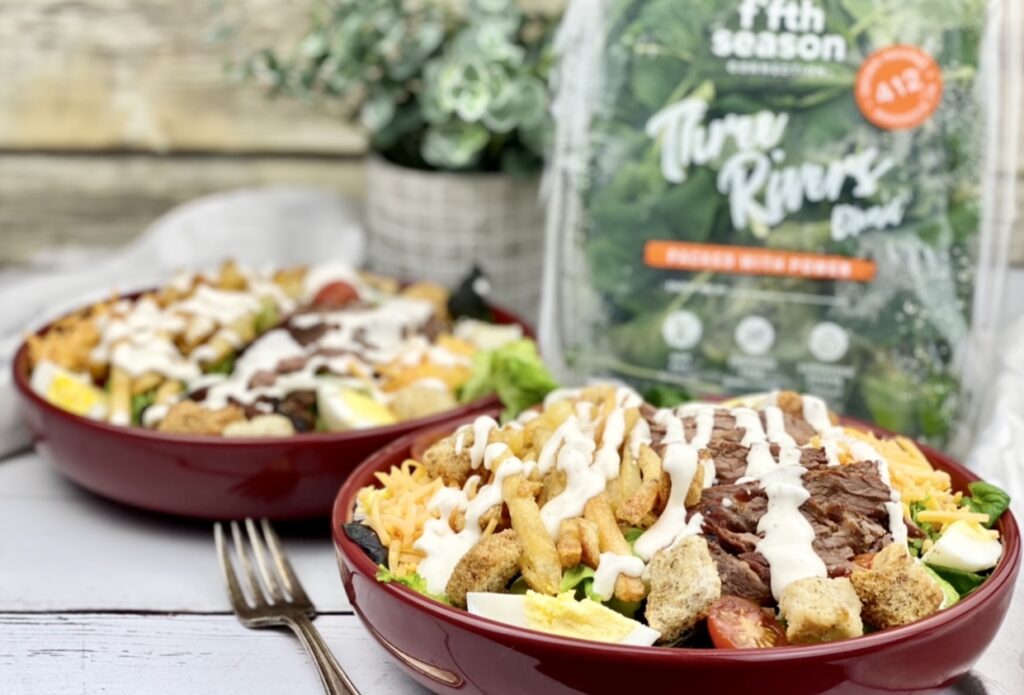 Disclaimer: I’m excited to partner with Fifth Season,  a Pittsburgh- based fresh food innovator that grows fresh, nutritious greens in a robotics-powered vertical farm, for this post. As always, the recipe and all opinions are my own, and I only partner with brands and products I genuinely love using in my own kitchen. 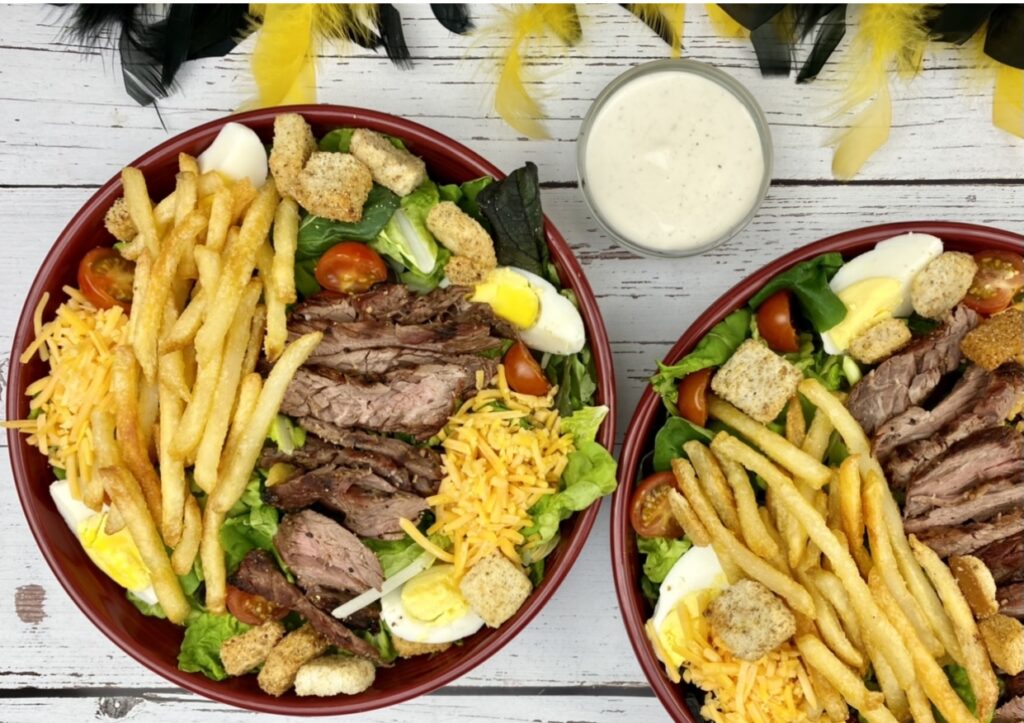 You guys know I’m a proud Pittsburgher!  I was 8 when my family moved to Pittsburgh. I still remember driving out of the Fort Pitt Tunnel, across the bridge and seeing the view for the first time. The big, bright city ahead. The Pittsburgh sports stadiums. The Gateway Clipper Fleet boats docked on the river.  Almost 40 years later, I’ve driven across that bridge more times than I can count, rode on all of the Gateway Clipper Fleet boats and have been all over the city,

Growing up, I never thought of Pittsburgh as a foodie city. Maybe because, as a kid, I wasn’t really that into food. I ate what my parents cooked me, and if we did eat out, they chose the place. It was usually the Spaghetti Warehouse in the strip district, or Pizza Hut.

Come to find out, Pittsburgh has a pretty strong food scene. It was recently ranked the third-best city in the nation for foodies by Apartment Guide. It has the seventh-highest number of restaurants per capita in the nation.

The city is also home to Heinz Ketchup, Sarris candies, Clark bar and Iron City Beer. And, though they didn’t originate in the city, Pittsburgh is known for perogies.

Eat-n-Park is another restaurant that originated in Pittsburgh. When I was in high school, my friends and I would hang out there, sipping iced tea and eating French fried dipped in their ranch dressing. If we went for dinner, I usually got their steak salad. It’s made with romaine lettuce, tomatoes, cucumbers, cheddar cheese, shaved beef French fries, croutons and ranch dressing. I loved that salad. Pittsburghers love their fries! 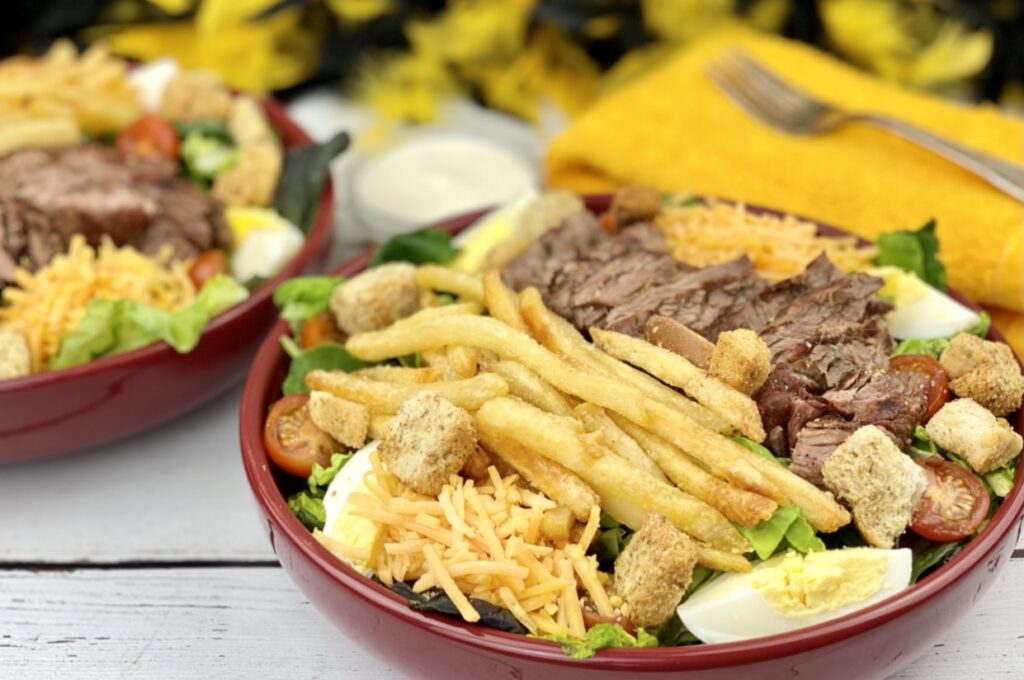 For most of my life, I thought that putting French fries on a steak salad was normal. In fact, I just found a few years ago that it isn’t. Brian, who’s from upstate New York, came over for dinner. I made steak salads. While eating, he told a story about the first time he ordered a steak salad in Pittsburgh and it came with fries. He thought it was so odd.

At first, I was confused by his comment. You mean, they don’t put French fries on salads in New York?

Was Pittsburgh the only place this was the norm? I seriously never knew that. 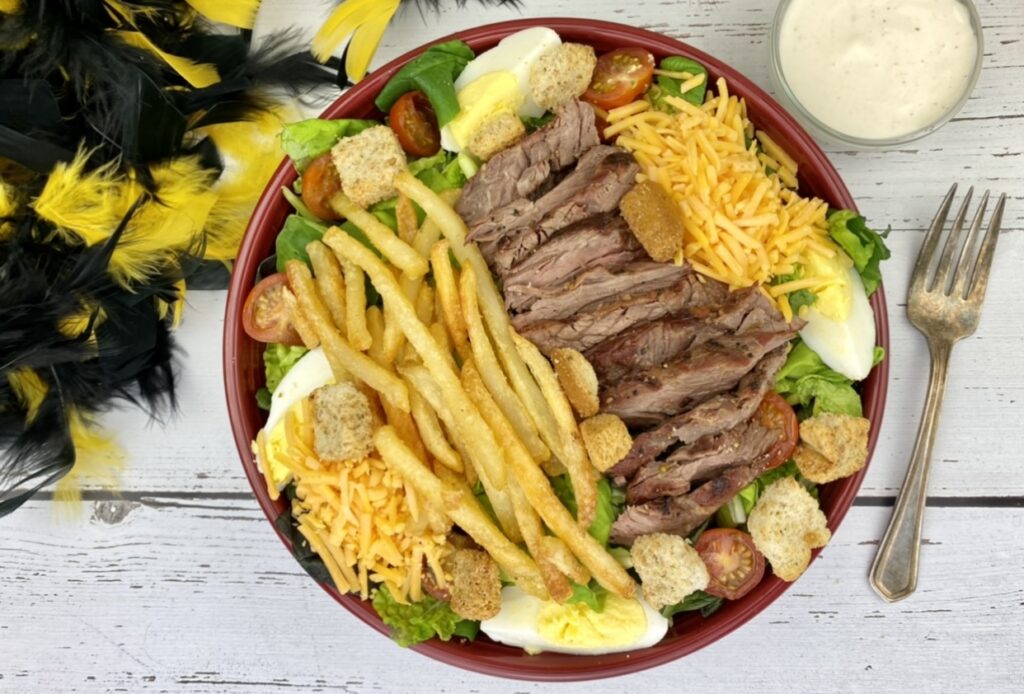 What Is A Pittsburgh Steak Salad?

A Pittsburgh steak salad is basically a steak salad that has French fries on it. It’s traditionally made with either romaine or Iceberg lettuce that’s topped with steak, French fries, tomatoes, cucumbers, a hard-boiled egg, cheddar cheese, croutons and ranch dressing. Though the exact origin is unknown, a commonly accepted story involves Jerry’s Curb Service in Beaver Pennsylvania. A man ordered a steak sandwich and asked for it to be made without the bun, but with added fries and salad dressing. Jerry’s wife then made a version of what he ordered over a bed of lettuce.

How To Make A Pittsburgh- Style Steak Salad 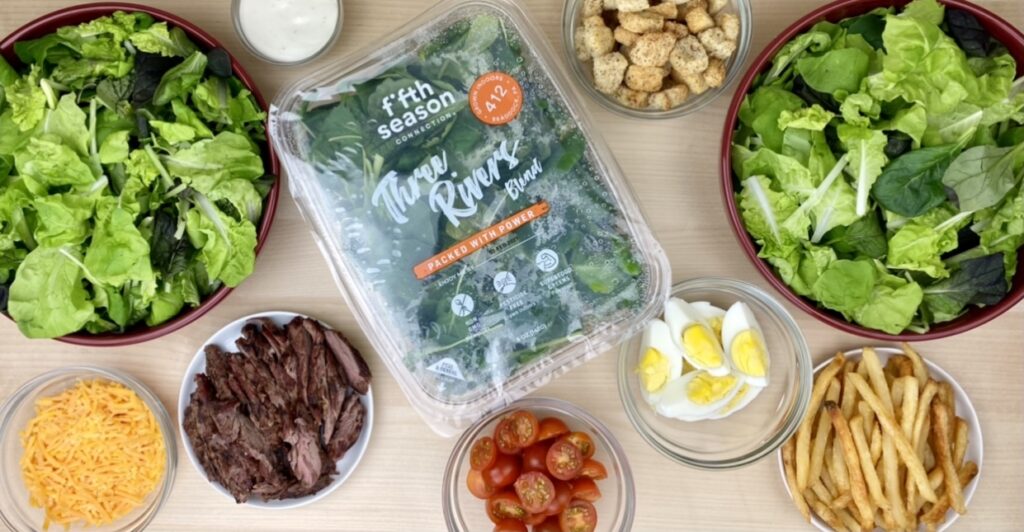 You need some greens to make this salad! I used 3 cups of Fifth Season mixed greens. I love all greens so I used a combination of their Three Rivers blend and their Bridge City blend. Fifth Season is a Pittsburgh based company that grows a wide variety of greens in a robotics-powered vertical farm. Since they are locally grown, they are super fresh. Plus, they deliver to my front door! Currently, their greens are sold in Pittsburgh, Cleveland and Columbus area. If you’re not living near these areas, you can  use the spring mix sold at your local grocery store.

Romaine lettuce is commonly used as the base of this salad, as is Iceberg. In Pittsburgh, it’s common to see those two lettuce varieties mixed together to make the base. You can really use any salad green you want. Heck, you can even mix in some spinach if you want. It’s not the salad green used to make a traditional Pittsburgh steak salad, but it’s packed full of nutrients. Use whatever salad green or combination of greens you want.

There are a variety of restaurants in Pittsburgh that offer a Pittsburgh steak salad and each one puts their own spin on it. That includes the type of steak. For this salad, I used filet mignon. I wanted a leaner cut that didn’t require a lot of trimming. I grilled it, then sliced it to lay over top of the greens.

In Pittsburgh, the type of steak you get depends on the restaurant. The one I grew up eating at Eat-n-Park is made with shaved rib-eye steak. My daughter ordered one recently at The Yard and it came with thickly sliced sirloin.

Fries are the key ingredient in a Pittsburgh steak salad, but the type varies drastically. I prefer thin, crispy fries so I used frozen shoestring French fries to make this version. You can use thick cut fries, homemade fries, waffle fries or any type of fries you want. 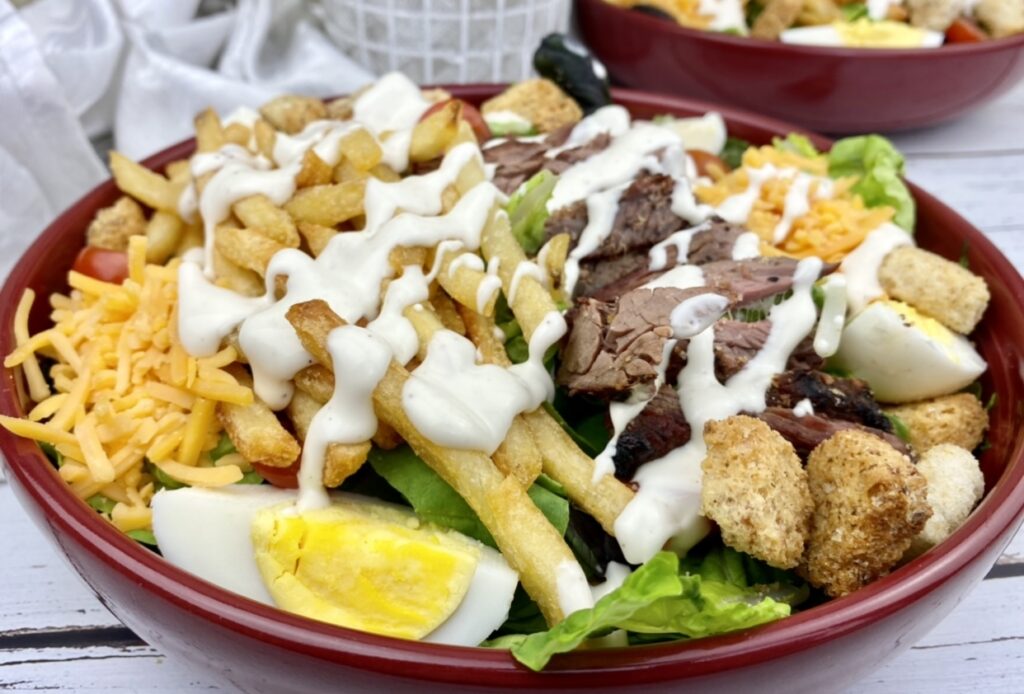 Shredded cheddar cheese is by far the most popular cheese seen on a Pittsburgh steak salad. That said, this is also optional. The salad that Mia ordered a few weeks ago at the Yard had fresh mozzarella. I’ve also seen it made without cheese. I wanted to stick to tradition, so this version includes some shredded cheddar.

Croutons are not a must-have ingredient, but I love the crispy texture they add, so I included them. This salad has the large, seasoned variety.

I used cherry tomatoes, but you can use any variety that you want.

Now for the dressing! Ranch dressing is very popular in Pittsburgh, and is often seen served with a Pittsburgh steak salad. It’s also my favorite dressing. So, for me, it’s a must have ingredient. I use my homemade, creamy reduced-calorie and fat ranch dressing on this salad. You can use any ranch dressing that you want, but using a different variety will significantly impact the nutrition information I provided below. 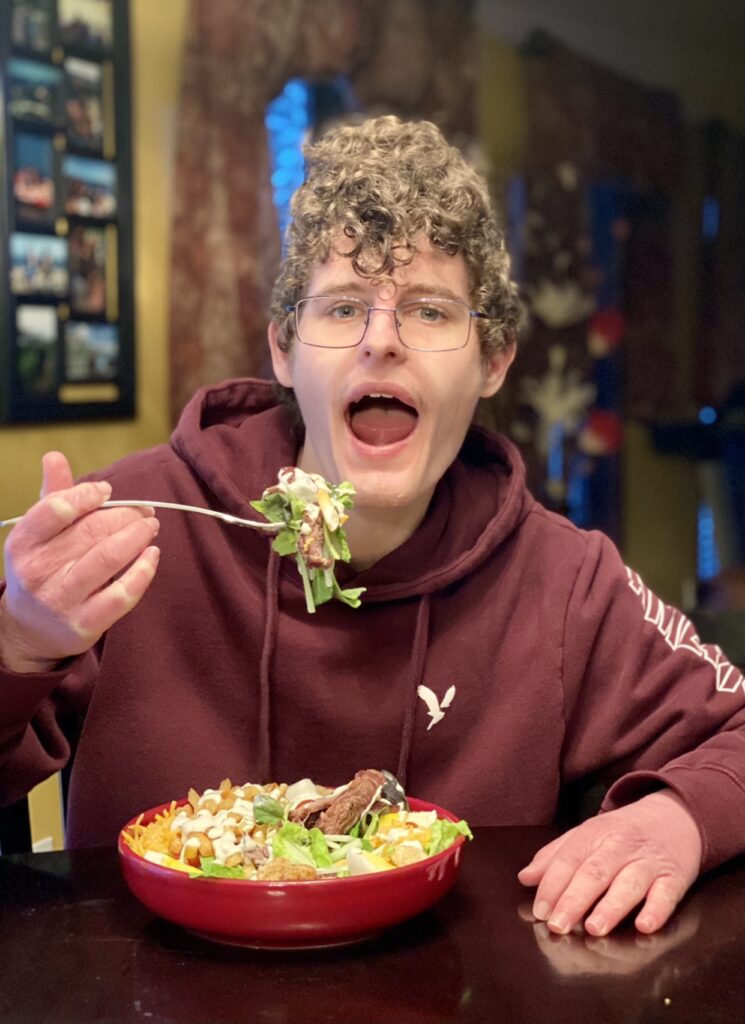 If you’ve never tried a Pittsburgh-style steak salad, you don’t know what you’re missing! This is one salad that even the kids will love!

What do you think? Are you ready to try a Pittsburgh-style steak salad? 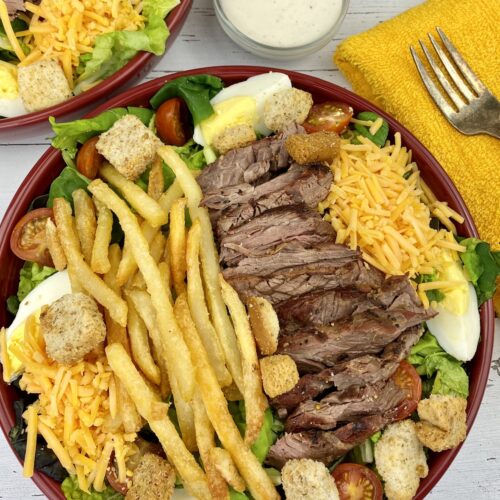