If you love beef and lamb, delicious wine, waterfalls and trekking on glaciers, make sure you add Argentina to your list of travel destinations. It’s an enormous country with an endless list of adventures – both inside and outdoors.

Traveling is, by far, my favorite thing to do. If I’m not writing food, nutrition or fitness content, or in my kitchen developing a new recipe, I’m probably planning, or at least daydreaming about my next fun adventure. I learn so much traveling to other parts of the country and world. Things that I would have never known. Or, at least never fully understood. That’s part of the reason that I include travel posts on my food, fitness and nutrition blog. I find that understanding and appreciating other cultures, and different eating patterns and style helps me to be a better dietitian. I also find it incredibly fun!

My two week trip to Argentina was just that – fun, adventurous and incredibly educational.  It was truly a trip of a lifetime.  My plan was to write a few blog posts while I was there, journeying my trip and sharing the food culture as I experienced it.  Unfortunately, I had a ton of connection issues, so time at my computer was scarce.  Looking back, it was a good thing. I was forced to disconnect and not worry about work. I did take took notes. Now that I’m back in the states, I want to share some of my fabulous encounters, including the food and wine that I had the opportunity of experience.

I’ve traveled to many places in my lifetime, and consider myself well versed in many different cultures. For three years, I taught food culture at the University of Pittsburgh.  I’ve read books, reviewed videos and pictures and studied the land and history of many different areas of the world.  I covered South America, and Argentina, when teaching my food culture class. I’ve taught students about the immigration patterns of South Americans into the US, their religious beliefs and family patterns, their traditional food beliefs, practices and staple foods and the diverse geography of the continent.  And, in preparation for my trip, I took Spanish classes over the summer.  .

As an experienced traveler, I know that nothing compares to the experience of visiting the land, living and talking with the people, and actually eating the food. I felt prepared to visit and talk with the Argentinian people and I thought my Spanish was descent. Man, was I wrong. 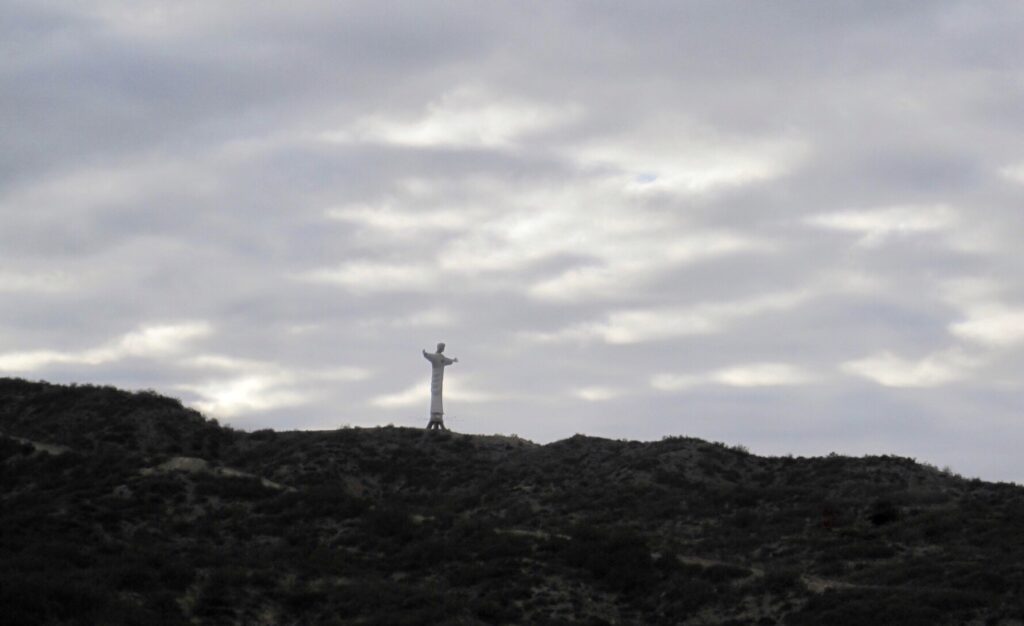 The History Of Argentina

Much like the US, Argentina is considered a country of immigrants.   Most Argentineans are descended from 19th and 20th century immigrants of Europe. It’s actually quite obvious when you arrive in the country. The most popular religion is Roman Catholic, and Spanish and Italian traditions have shaped the family structure.  As we traveled across the country, we often spotted smaller statues resembling Christ the Redeemer – the famous statue of jesus Christ that’s in Rio de Janeiro, Brazil. It sits high in the Andes Mountains, and marks the border between Argentina and Chile.  Fun fact – it’s considered the largest art deco statue in the world. 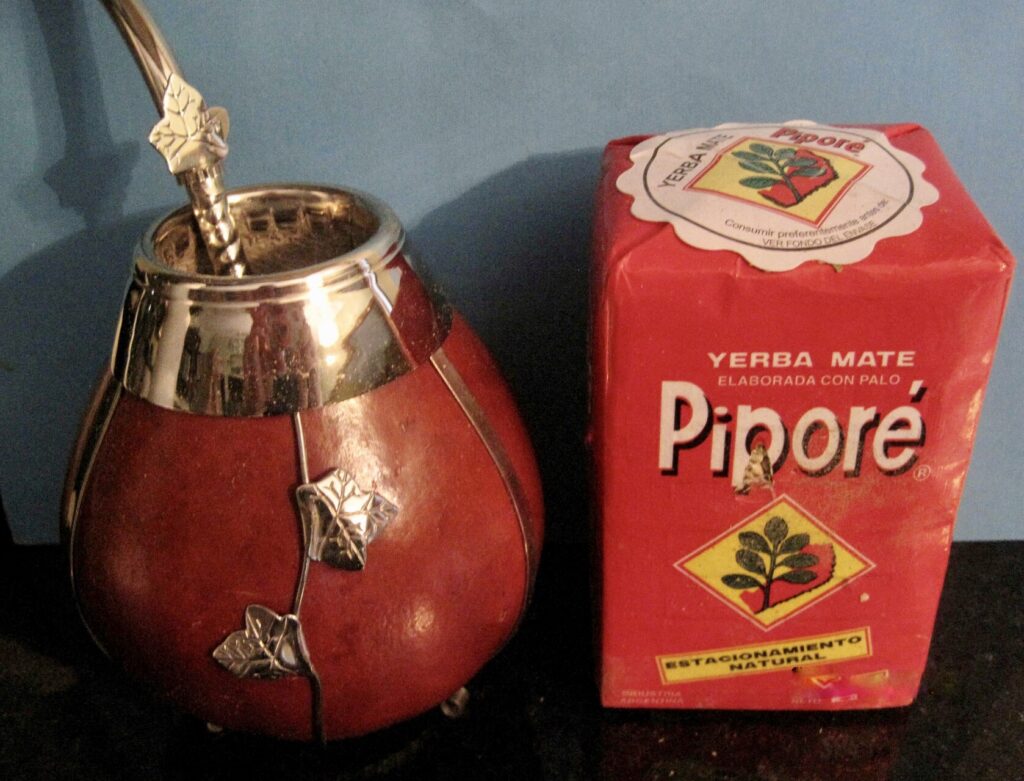 There is limited information available on the traditional health beliefs and practices of Argentineans, so I took it upon myself to learn from them while I was there.   Herbal teas are a popular remedy and you can buy medicinal botanicals for home use at small markets called yerbeterias.  Our Argentinean tour guide described how many woman drink Yerba Mate as a way to “keep their figure.”  Of course, there is absolutely no evidence to support such a claim, but I did buy some to try.  It didn’t shed any pounds, but it’s not bad. I admit I had to add sugar in order to drink it.

Another health tip our guide shared was that garlic and onions are commonly thought of as preventing altitude sickness when hiking in the Andes.  Apparently, the cocoa plant is too.  Northwestern Argentina, along with other north western countries in South America, are known for the cocoa plant and it’s an important part of the Andean culture. 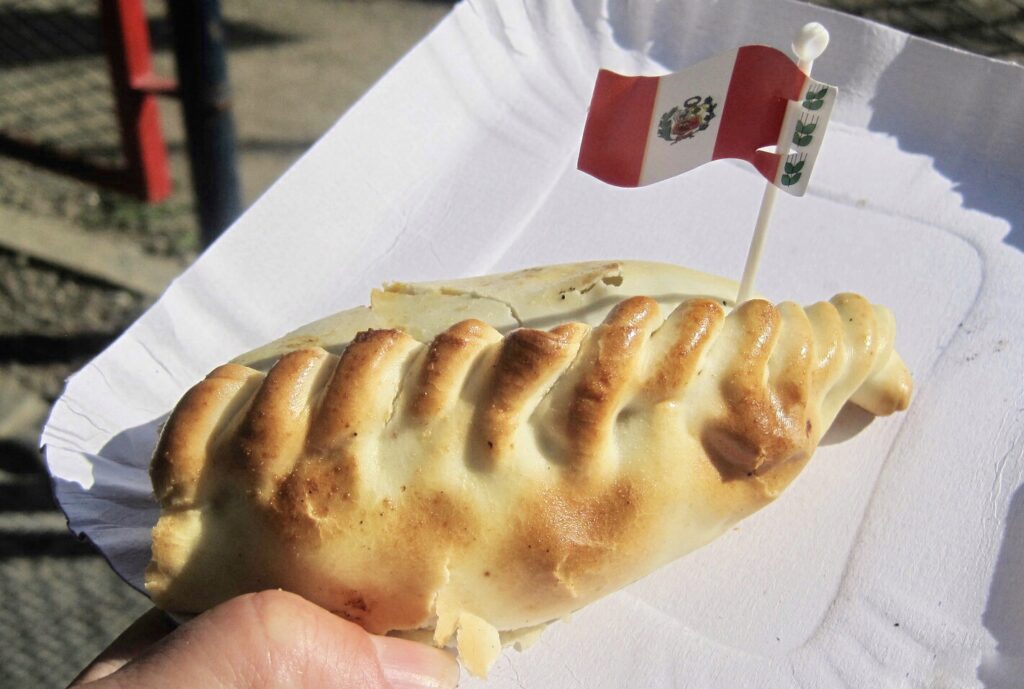 Agriculture in Argentina is an extremely important part of their economy.  It is a major beef producing region. In fact,  they eat more beef per capita than any other country worldwide.  Soybeans, wheat and maize are other important exports.  While I am not a huge fan of red meat, I wasn’t about to leave Argentina without trying the beef. In fact, I enjoyed quite a few beef meals while there. They were all amazing. 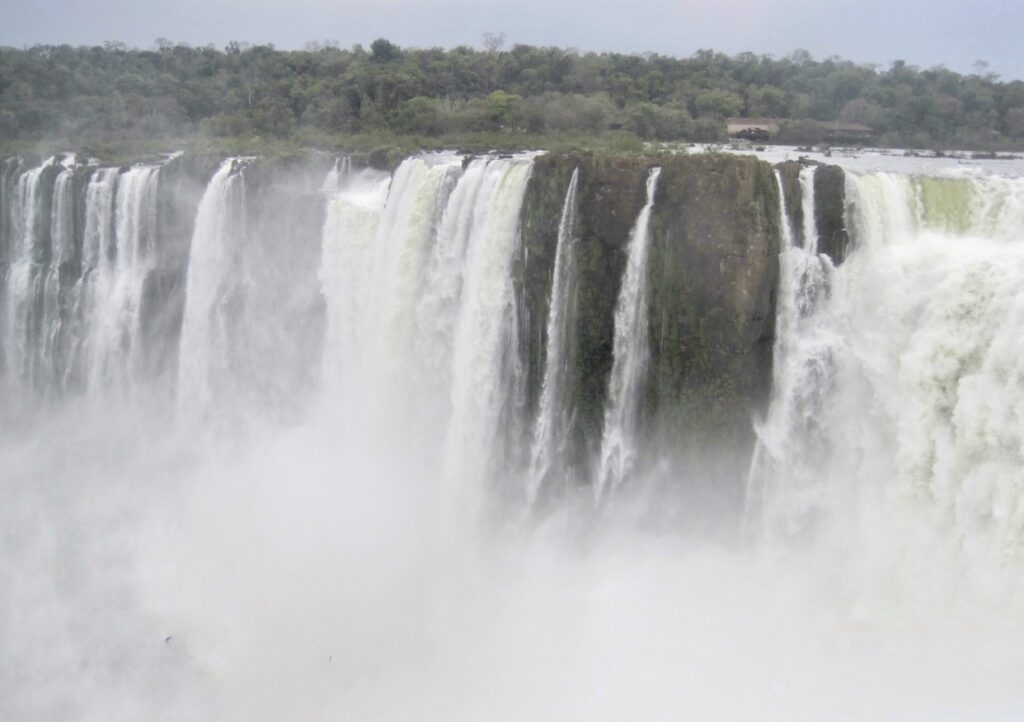 This trip took me all over Argentina. We flew into Buenos Aires, stayed one night, then took off for the northern providence of Misiones. We wanted to spend a few days at the beautiful Iguazu Falls.

The Iguazu falls divide Argentina and Brazil, and are therefore shared by both countries. We visited the falls from the Argentinian side first, then walked over to the Brazilian side. The Argentinian attracts more tourists, because it has several trails and roads that allow you to explore the park.

The area is a combination of Argentinian and Brazilian cultures, which shows up in some of the food. Meat dishes and pizza were everywhere, which I would expect in Argentina. But, some food traditions of the Guarani people were still present. One thing I noticed was that mandioca (i.e. cassava or tapioca) was a common substitute for potatoes in many of the meat dishes. Chipás, which are round bread rolls stuffed with cheese or cassava flour, are available at all of the bakeries and street vendors. They are commonly served with mate tea.

Surubí is a fish meal that can be found on restaurant menus all over town. It’s a type of South American catfish found in the Iguazu and Parana rivers. If you love seafood, I highly recommend trying this. It’s expensive, but worth it. 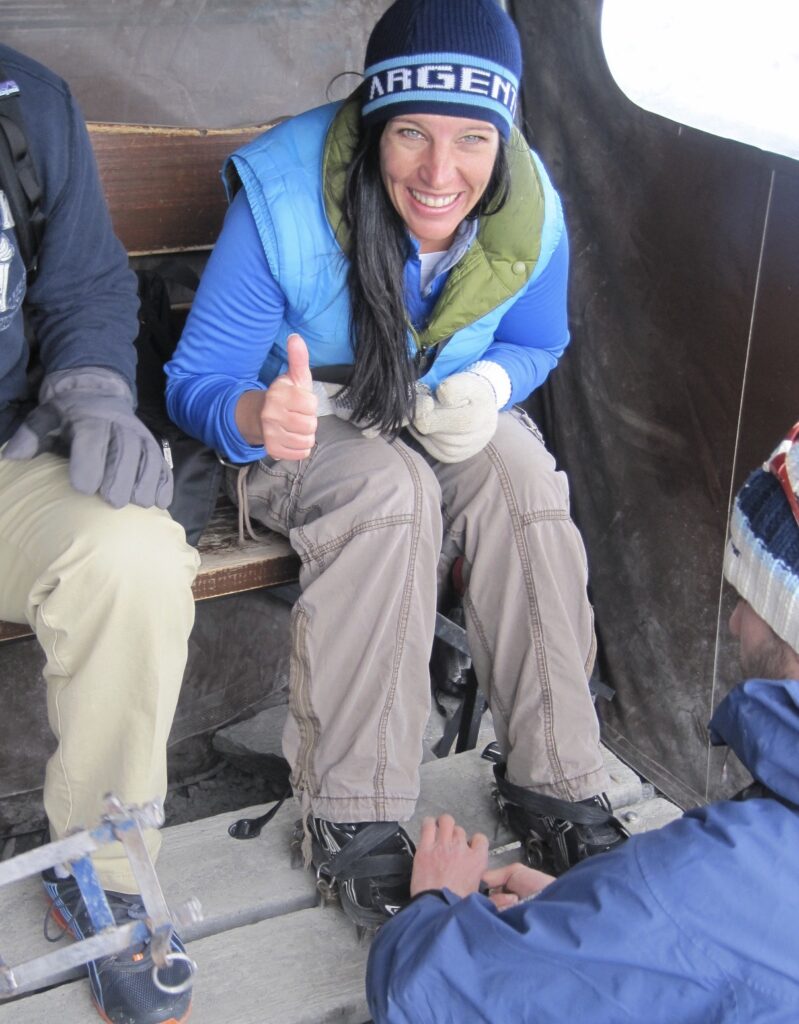 From the northern providence, we flew the complete other direction. We headed south to El Calafate, a small town located in Santa Cruz. There, we visited the Los Glaciares National Park and the beautiful glacier Perito Moreno.  It entire area was absolutely breathtaking! The town reminded me of one you’d find in Utah or Colorado.

Now, to the food. The southern region of Argentina is well-known for its lamb. You’ll find it at most restaurants, and can get it prepared a variety of ways. The traditional way to cook and eat the lamb is outdoors, at an asado. The asador, or person preparing the lab, cuts the whole lamb lengthwise, spreads it open and ties it to a spit angled toward a hot coal fire. That preparation method is very lengthy, but from what I heard, the taste is top-notch. 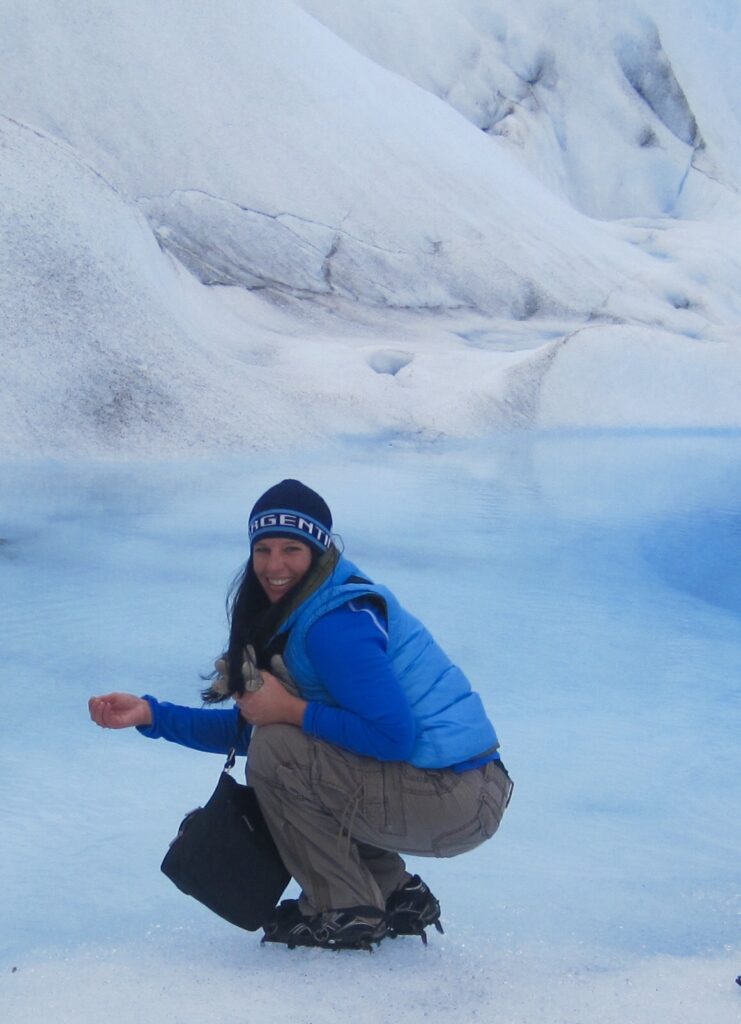 We did not attend an asado while we were in El Calafate, but I did try the lamb. Even though I’m not a huge lamb fan, I couldn’t go the El Calafate without trying their signature dish. And, I’m glad that I did. The grilled Patagonian lamb filled with flavor and absolutely delicious.

Other than lamb, there’s not a lot to share in terms of different food culture. They have a variety of restaurants, and they serve a lot of meat!

We spent two nights and two and half days in El Calafate. I felt like that was plenty of time. 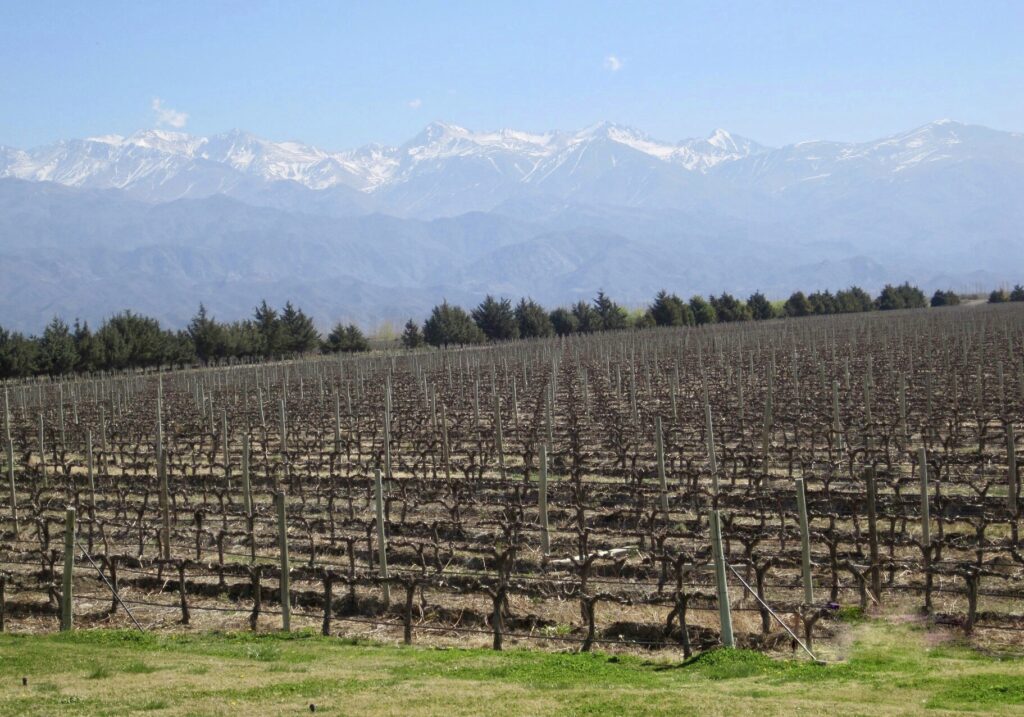 The next flight took us to the long awaited city of Mendoza.  As a wine lover, I welcomed this portion of the trip. It was a few days of rest, relaxation, horseback riding, food and wine.  We stayed at the beautiful Salentein, a winery located about 1 ½ hours from the city of Mendoza. We visited many winery’s while we were there, and they were all absolutely amazing! 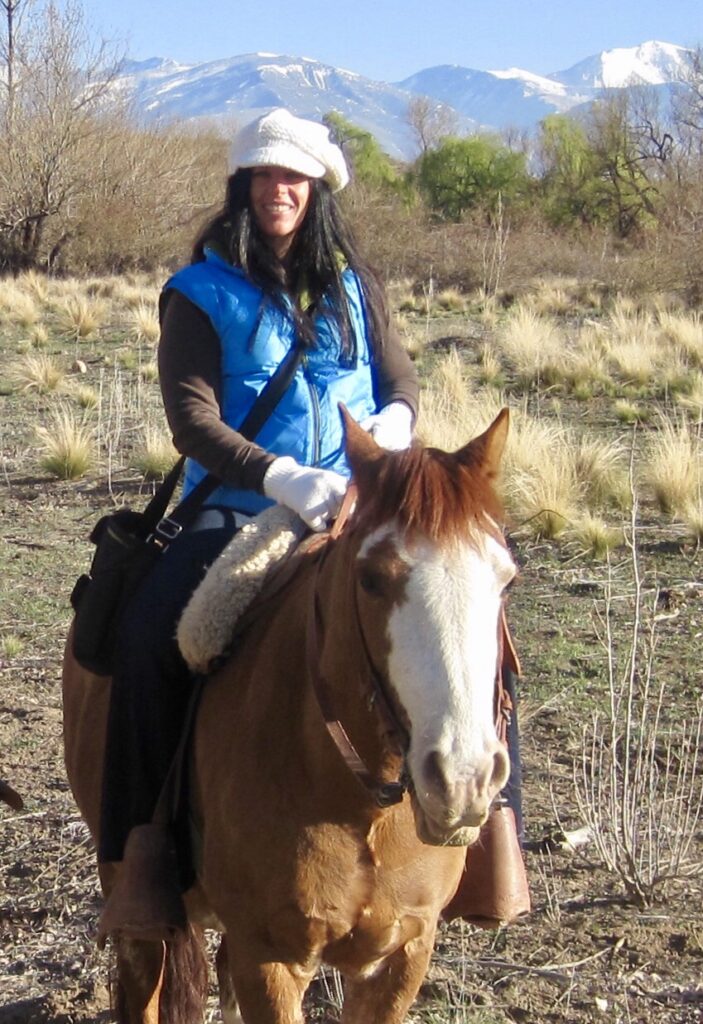 The food in Mendoza was similar to what we had already experienced. Breakfast was continental style, with ham, cheese, crackers and biscuits and jam. 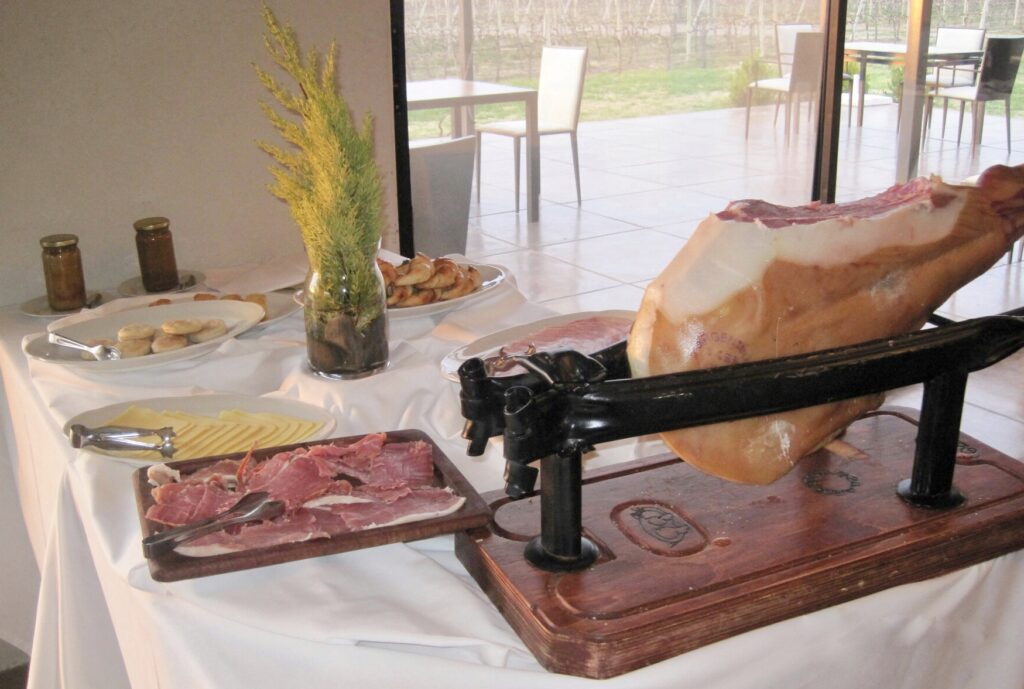 One evening for dinner I had beef, and the other evening I had calf steak. 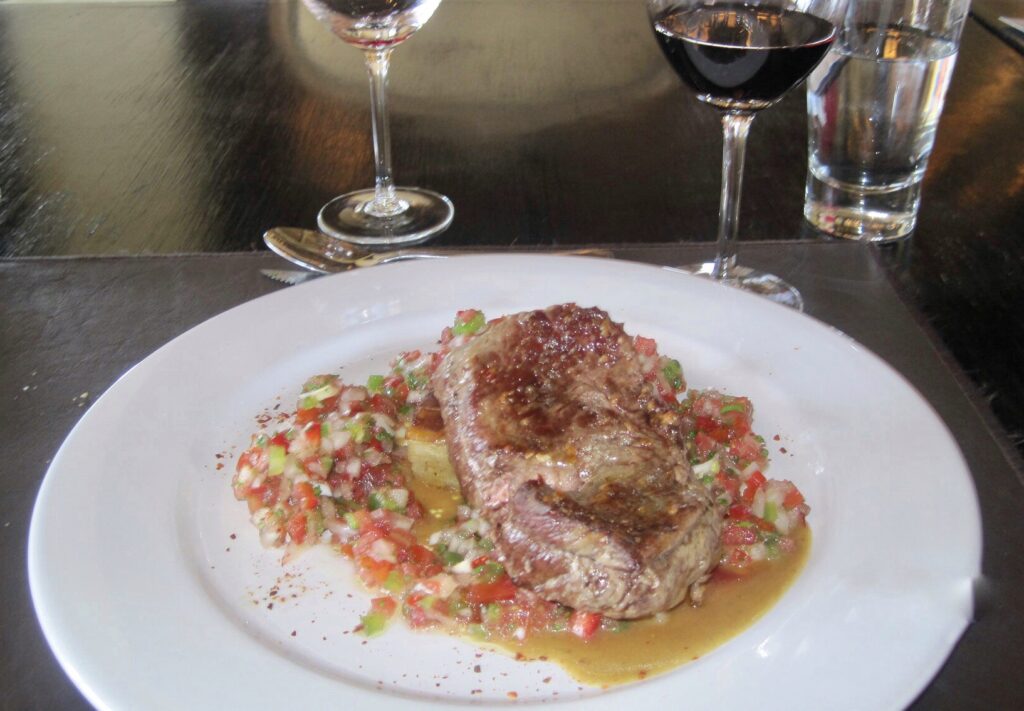 I also had an absolutely delicious empanada one of the days. And, of course, a lot of wine! 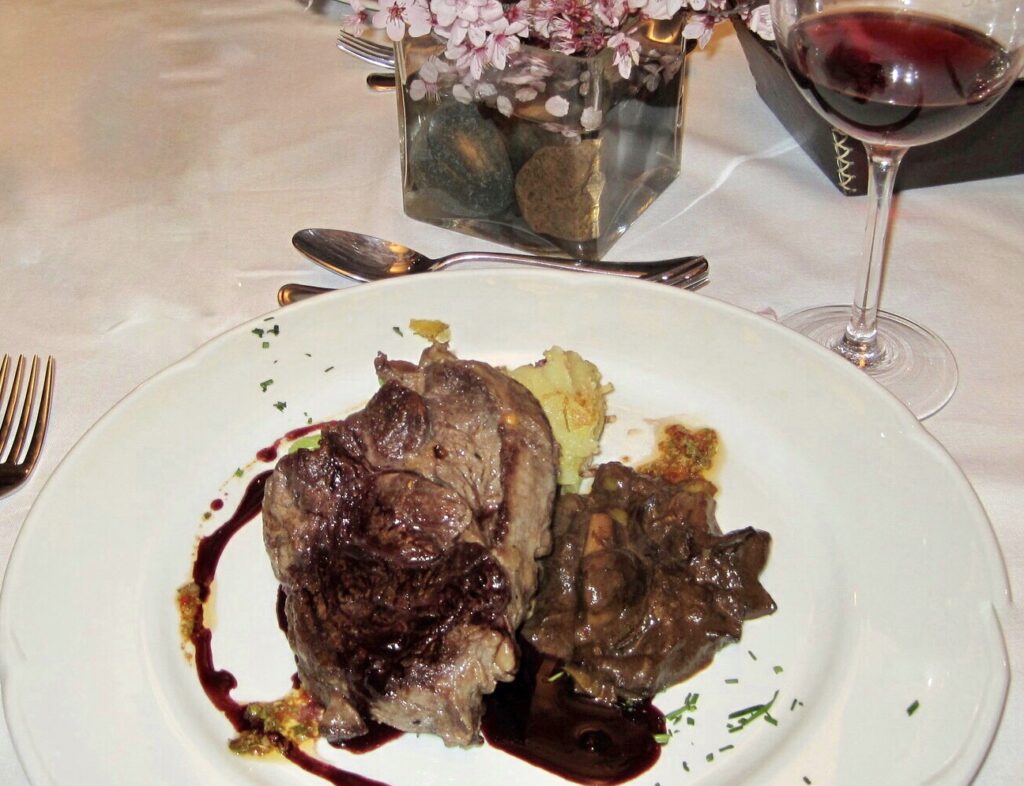 Every March, The Fiesta Nacional de la Vendimia (The National Grape Harvest Festival) is held and attracts many tourists.  If I do ever return to Mendoza, I’ll be sure to go in March.

Buenos Aires And The Tango

The trip ended back in Buenos Aires. This time, we stayed in the Palermo neighborhood.  Even cities have diversity among them, and I like to visit a few different areas and neighborhoods  when I visit places.

One of the first outings we booked in Buenos Aires was a tango. This was a big highlight for me. It was similar to a dinner show that offers entertainment while you eat.  We had to buy the tickets in advance, and then we walked from our hotel to the tango. As you might expect in Buenos Aires, we had beef for dinner and of course, some wine. It was delicious!

We walked a lot during out stay in Buenos Aires. It’s such a great way to see the city, and it keeps me active. We also took the hop on, hop off bus tour. That’s another thing I do a lot when I travel. It’s a great way to see everything and get some history. After the bus tour, you can decide what areas you want to go back to see more.

We ate a lot of empanadas, shopped and mingled with the people.

Visiting these four different areas of Argentina – from north to south and east to west – was a lot for two weeks. But, when you have kids, it’s hard to get large chunks of time to travel. We spent a few days touring at each place, but also enjoyed visiting the towns, talking to the locals and learning about the culture.

This trip would not have been possible without a travel guide. The Spanish that is spoken in Argentina is different than what is spoken in Spain. I’m sure I would have got by, but having a local with us made the trip so much more educational. She met us at the airport on the first day and was extremely helpful in getting us to the local airport for our travel within Argentina. 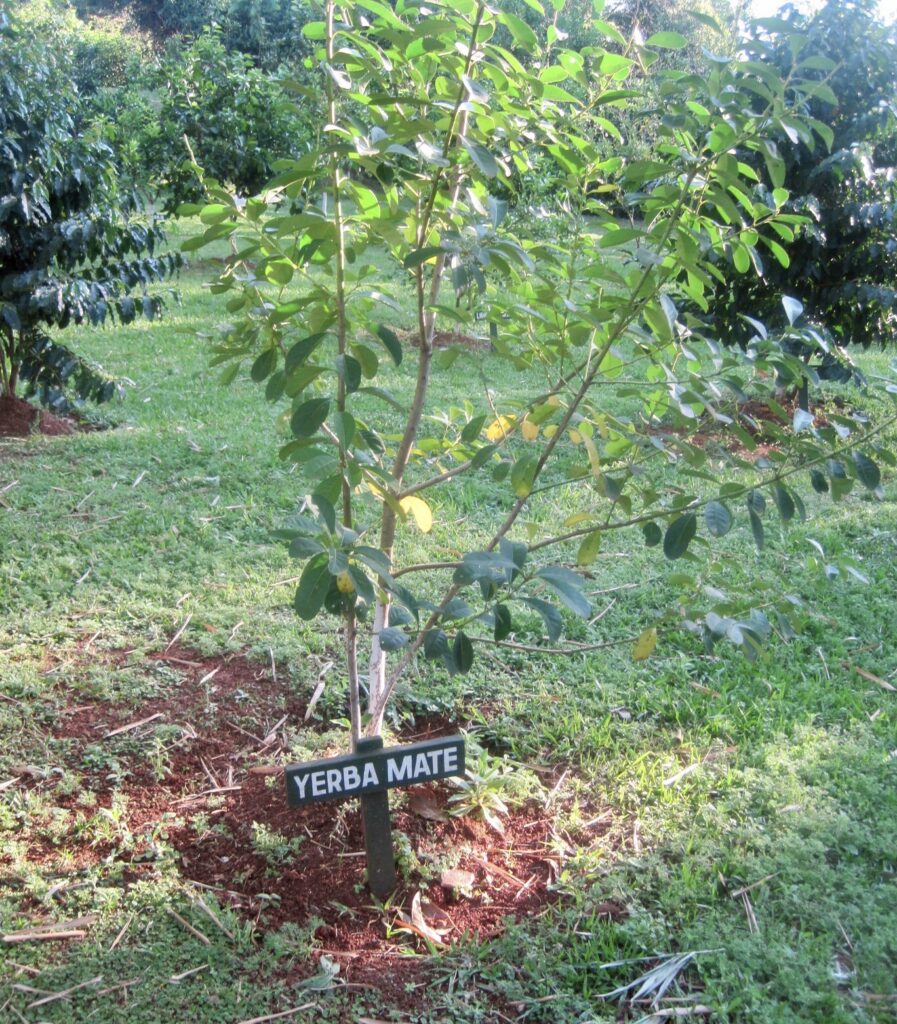 She also took us through neighborhoods that we would have never seen, and gave us a full history lesson of the region. It was fun to hear her stories, seeing the non-touristy areas, and getting a real feel for what it’s like to live in Argentina.

There is a lot to be learned from other cultures.  As with most trips I take, I returned home with a better understanding of how others life and have an even greater appreciation for cultural diversity.

Have you ever traveled to Argentina?