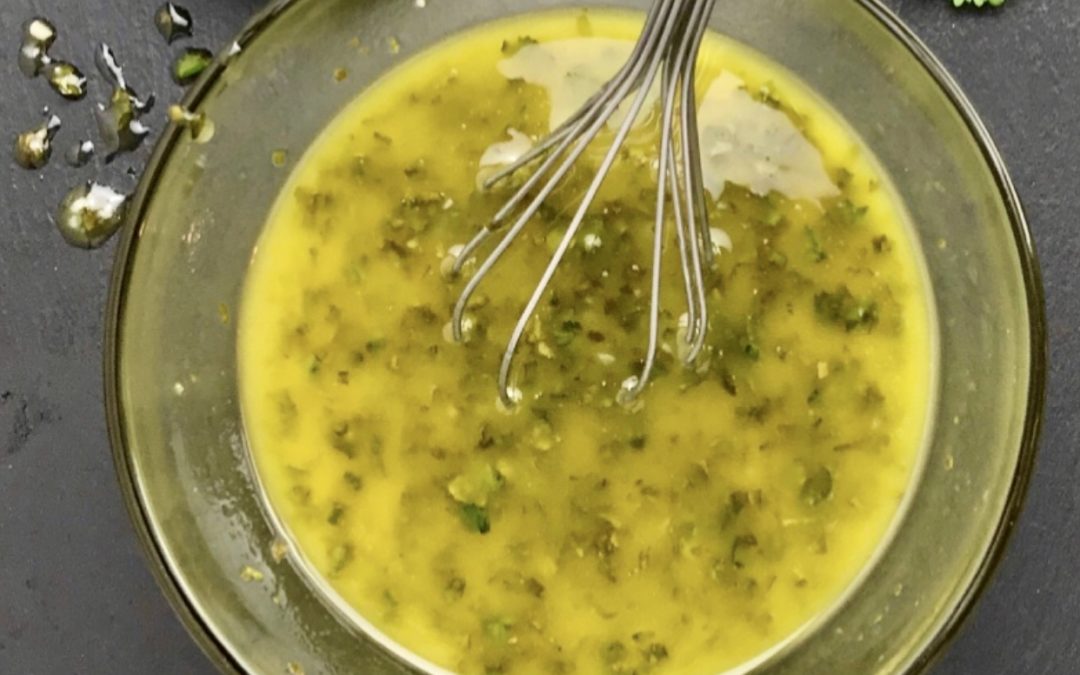 This homemade lime cilantro vinaigrette is made with only a few ingredients and can be used to dress salads, marinade chicken and fish, or to add flavor to rice, noodles and more. 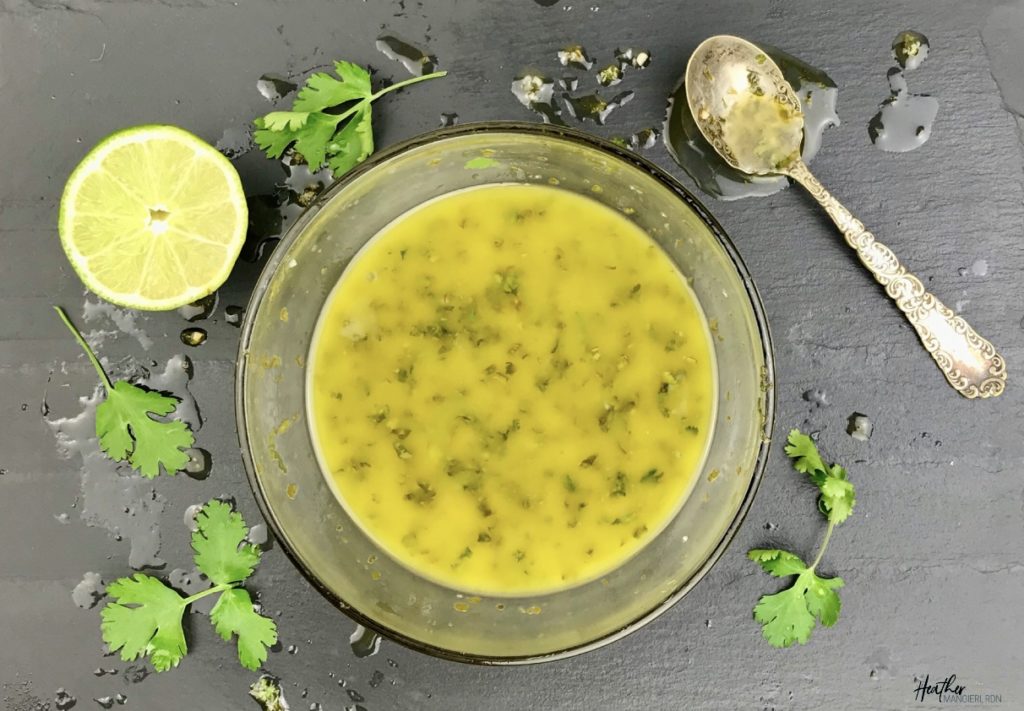 If cilantro was a food group, it would definitely be my favorite. I love the flavor and freshness that it adds to dishes.

My first encounter with fresh cilantro was over twenty years ago. My sister-in-law was making a batch of her famous homemade salsa – something she made by request at every family gathering. It’s still the best salsa I’ve ever had.

I wanted to learn how to make her homeamde salsa. so I decided to help.

My sister-in-law, Sam,  handed me a bunch of fresh cilantro to chop. I remember the aroma so distinctly. I fell in love with the smell of the herb, and have been using it in recipes ever since. Apparently, not everyone agrees with my sense of smell. 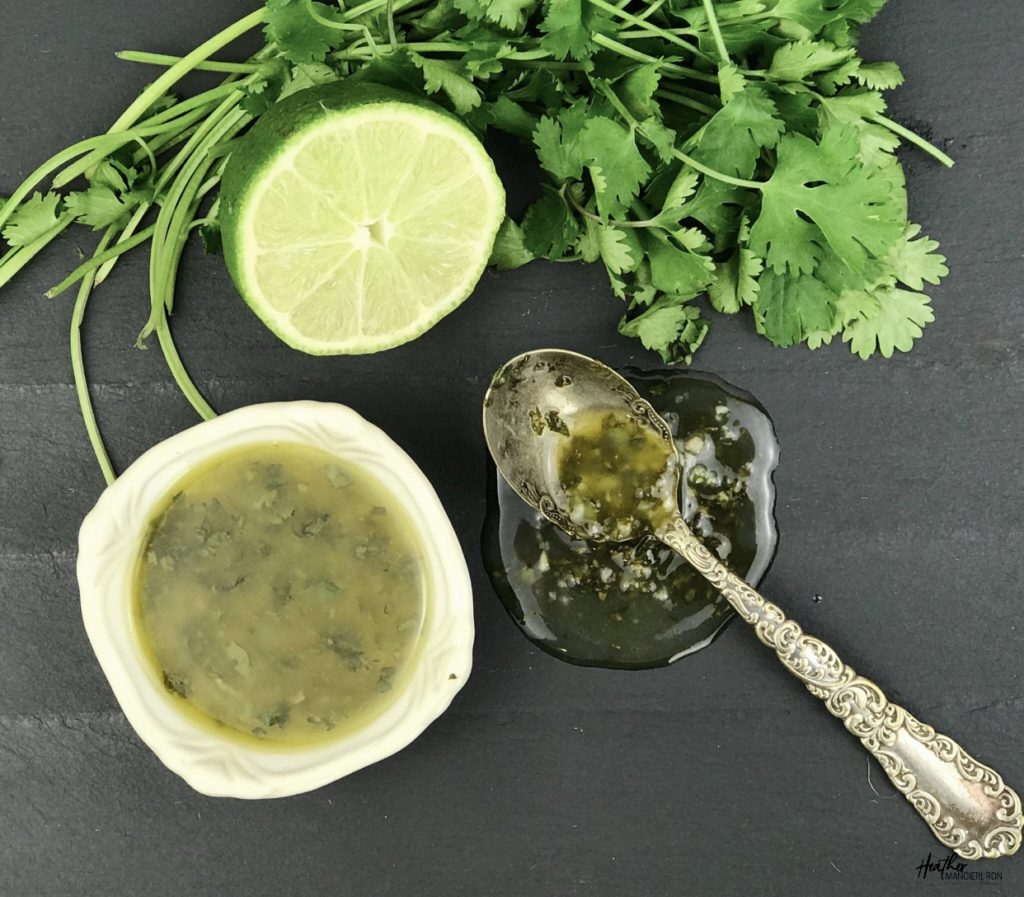 Cilantro is described as polarizing, meaning people either love it or hate it. Though not proven, some scientists believe it’s cilantro’s odor, not necessarily the taste, that people dislike. That makes sense, since smell plays a huge part of what we choose to eat and not eat.

I think cilantro has a fresh, lemony, awakening small. Others claim is has a pungent smell, like soap or dirt. The smell has even been compared to that of a stink bug. This confused me – I love the smell of cilantro, but I hate the smell of stink bugs. How could this be?

Turns out, whether or not you like the smell of cilantro has to do with science.  A 2012 study by Erikson et al, found that how people perceive cilantro is related to our genetics. The soapy aroma that some people smell is due to several aldehydes that are present in cilantro. Those aldehydes have been found to activate a specific olfactory receptor responsible for the soapy taste and smell.

I’m definitely on the love cilantro list. If you’re not, you might prefer my homemade, reduced-fat ranch dressing recipe better than this lime cilantro vinaigrette. 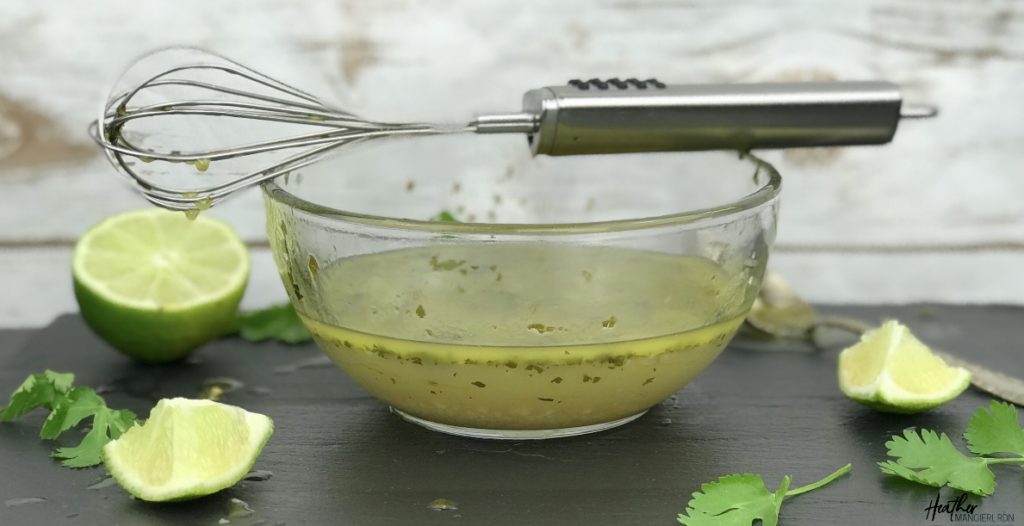 Cilantro is a leafy green herb that comes from the coriander plant. It is widely used to flavor dishes, especially in Latin American, South Asian and Middle Eastern cuisine. In some places, cilantro is actually referred to asfresh coriander leaves. That can lead to some questions about the differences in the two.

Cilantro and coriander both come from the Coriandrum sativum plant. In the United States, we refer to the plant and stems as cilantro and the dried seeds as coriander. Internationally, though, the green leaves and stems are referred to as coriander, while the seeds of the plant are known as coriander seeds. When trying to decipher which to use for a recipe, you have to know whether you want the green leafy part, or the seeds. That’s important, because they have very different tastes and purposes.

As I mentioned, cilantro is used in many different cuisines. It’s a common ingredient in homemade salsa, and can be used to boost the flavor of many other foods. Cilantro adds flavor to salads, soups, stir-fry, noodles, juice or a smoothie and much more. Something as simple as mixing it into sour cream makes a big difference in taste. It’s commonly used as a garnish, and can be mixed with oils to create a salad dressing or marinade. That’s how I used cilantro for this recipe.

This lime cilantro vinaigrette is super simple to make – you don’t even need a blender. The most time consuming step is chopping the cilantro into fine pieces. Once that’s done, you just mix everything together, and pour it over your salad. It’s really that simple. 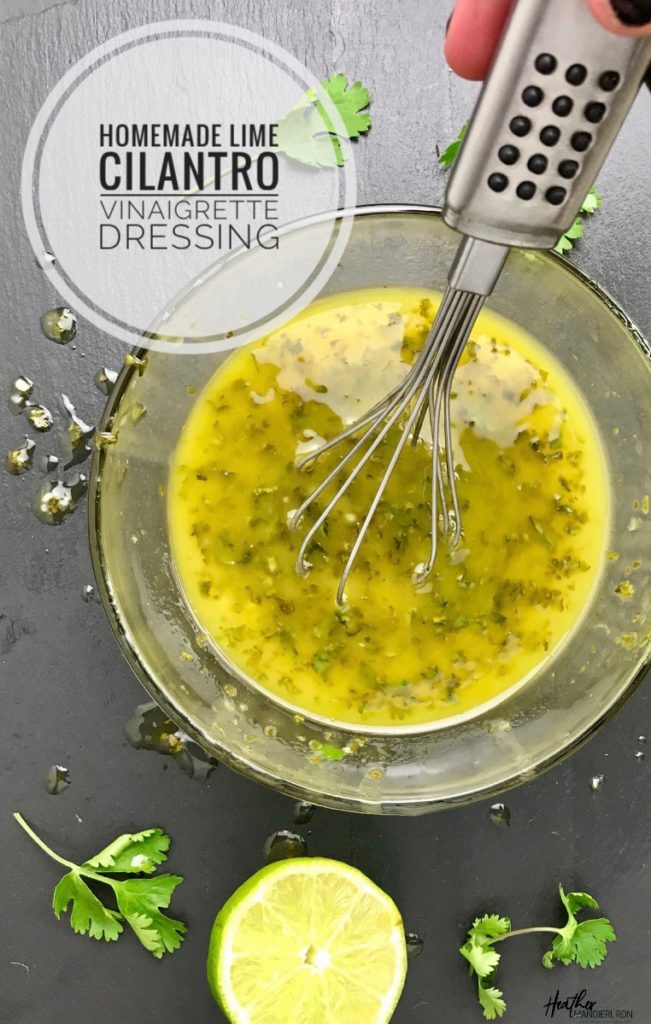 This homemade salad dressing isn’t blended, so the ingredients will separate almost immediately after making it. Just give it a shake before pouring. After you make it, be sure to store it in a sealed container and keep it in the refrigerator. It also has a short ingredient list, and doesn’t contain tons of additives or preservatives. That means, it won’t last as long as store-bought salad dressing. The flavor will start to deteriorate after ~4 days, and you’ll want to be sure to use it within 1 week.

This lime cilantro vinaigrette is what I used to dress this arugula and pear salad.  I’ve also used it as a marinated for chicken skewers, and as a seasoning over fish. You can get creative, though, and mix it into rice dishes, over noodles or as a dipping sauce.

So, tell me – what do you think cilantro smells like? 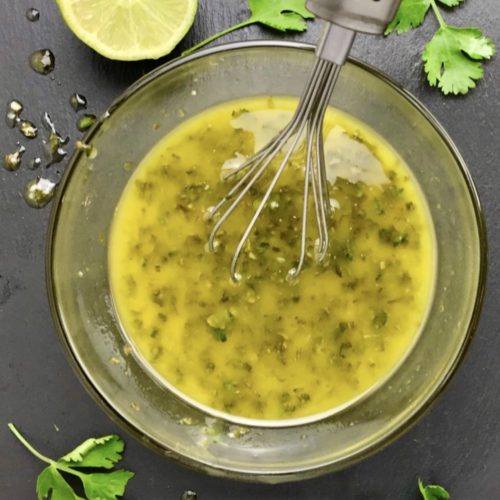 This homemade lime cilantro vinaigrette is made with only a few ingredients and can be used to dress salads, marinade chicken and fish, or to add flavor to rice, noodles and more.
Author: Heather Mangieri, RDN

DID YOU MAKE THIS RECIPE?  Tag @heathermangieri  on Instagram and hashtag it #HeatherMangieriNutrition to all recipes. Or, Pin it on Pinterest for later.